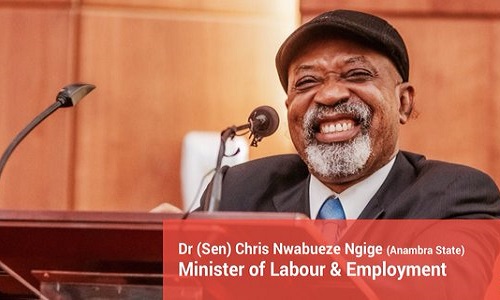 The Minister of Labour and Employment, Senator Chris Ngige, yesterday reiterated the Federal Government’s commitment to implementing the approved N500 billion for the social intervention scheme.

The minister also said that the fund will take care of one million jobs to be created as proposed. He explained that 500,000 graduates from various disciplines will be trained and employed under the ‘Teaching Aid Corps’ while over 300,000 school leavers and holders of First Leaving Certificates will be trained in various skills acquisition.

Senator Ngige who dropped the hint in an interview with journalists in Abuja said that there were plans by the Federal Government to partner with State Governments on the revival of 74 skill acquisition centres, Trade Test centres and Technical schools across the country.

According to him, “under the intervention Programme for the social intervention policy of the government for which we have budgeted N500 billion, nobody has gone to that area of fund. So that N500 billion is intact.

“Operation Teach Nigeria is like Teaching Aid Corps, where 500,000 graduates in various disciplines will be taken in from the army of unemployed graduates and trained to become teachers.

“The next programme that will touch big volume is the skill acquisition or general education skill training, which conservatively will take about 300,000 persons. We initially wanted to take 370,000 persons but the initial target is that within the first 6 months, we will do 300,000.

“If we have 300,000 in one year, 300,000 in the second year and 300,000 in the third year, we are having about 1 million persons. We will have more than enough because of our population and the quantum of people we have in the unemployment market,” Ngige said.