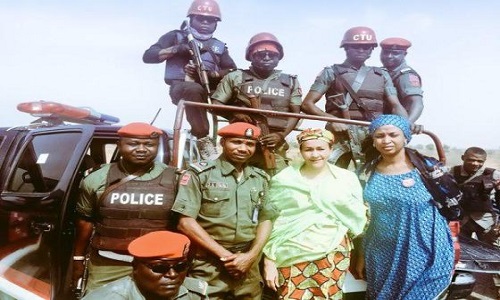 Governor Kashim Shettima of Borno State yesterday led a federal government delegation to Chibok, the community where over 200 schoolgirls were abducted two years ago by Boko Haram.
The delegation, which included Ministers of Environment Amina Mohammed; State for Power, Works and Housing, Mustapha Baba Shehuri; State for Budget and National Planning, Zainab Shamsuna Ahmed and Special Adviser to President Muhammadu Buhari on Social Investments, Maryam Uwais, interacted with parents of the abducted girls.
Others who visited Chibok on the second year anniversary of the abduction included Senate Majority Leader, Senator Mohammed Ali Ndume; Senator Binta Masi Garba from Adamawa State, a founding member of the Bring Back Our Girls (BBOG) Group, Hadiza Bala Usman, and state government ‎ officials.
The visitors, who traveled by road from Maiduguri, the state capital to Chibok, a journey of about three and a half hours and returned by evening, under heavy security, were greeted by the horrible sights of Boko Haram’s destruction in communities along Maiduguri-Damboa road.
The leader of an association of parents of the remaining 219 Chibok girls still held captive by Boko Haram, Mr. Yakubu Nkeki, read an emotional poetry written by the parents to express how much they miss their daughters, and hoping for their return.
“We don’t know whether you are dead or alive, whether you have eaten or not, whether you are forced to do things you wouldn’t want to do or not but we miss you and pray for you” the note says as parents wept profusely.
The parents expressed concerns on the silence on the report of a Presidential fact-finding committee set up former President Goodluck Jonathan to establish facts surrounding the abduction of their children.
The parents demanded that the committee’s report be made public so that they will know if anyone has questions to answer.
The committee submitted its report in 2014 but has not been made public.
In his remarks, Governor Shettima said his administration shared the pains of the Chibok parents and was working hard with the Federal Government for the release of the girls.
Leader of the federal delegation and Environment Minister, Ms. Mohammed said President Buhari sent them to Chibok to show the extent of his affection for the traumatized parents.
“It is with heavy heart that we visit today. We visit today because it is not for want of efforts that your children, our children have not been found.
“We had prayed that we will bring good news to you now, but the only news that we are bringing to you is our continuous commitment to bring back those daughters to their families and their communities”, she said.
Ms. Muhammad said that government would continue to liaise with the military and its allies in the international community towards finding the girls.
“He wants your daughters back and he wants all other captives back, he wants to end this insurgency and he is doing everything to achieve these important objectives that top his priorities since assumption of office”, the Minister said.
Senator Masi corroborated the remarks by Shettima and Mohammed just as she quoted from the Bible.
Masi, who hails from Michika in Adamawa State, said: “Insurgents have no regards for religion, they attack anyone no matter your religion”.
A founding member of the BBOG group, Aisha Usman, broke down in tears when it was her time to address the parents.
“I know exactly how you feel”, she said and could not continue.
Mrs Uwais, also a founding member of the BBOG, called on the parents to remain strong, assuring that government was doing everything within its powers to rescue their daughters and others still being held captive by Boko Haram.
The Minister later announced government’s donation of a truck of food items, clothing and money to the mothers of the missing girls.