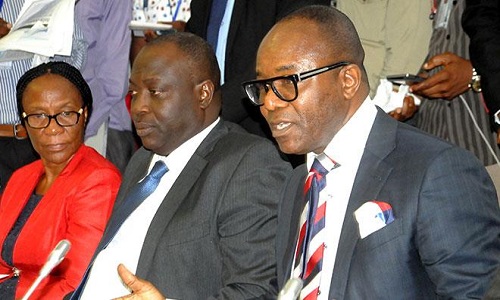 The Federal Government has blamed unscrupulous dealers for the lingering fuel scarcity in some parts of the country, vowing henceforth, trackers would be installed on trucks to monitor criminal diversion of petroleum products from the points of distribution.
The Minister of State for Petroleum, Ibe Kachikwu, made this known yesterday while speaking at a Town Hall meeting organized alongside five other ministers with residents of South West geo-political zone, in Lagos.
According to the minister, over 30 per cent of the fuel supplied is diverted by these unscrupulous dealers to neighbouring countries
Kachikwu said: “I have had countless sleepless nights. I work round the clock to solve this problem because whatever touches you touches me. Over 30 per cent of fuel is diverted to Chad and Cameroon. But I continue to oversupply and you see some people making money out of the agony of Nigerians”.
Apologising for the umpteenth time over the lingering fuel crisis, the minister said: “What we met on the ground when we came was complete lack of transparency but we have worked to put everything in order. The loss of N300 billion by the Nigerian National Petroleum Corporation (NNPC) has been reduced to N3billion, subsidy payment has been reduced to near zero. We are focusing on business, not bleeding the government”.
“We are working on ideas to solve the problems. I worry about a lot of things, about the trucks. What we want to do now is to make sure that we select only truckers who can install trackers on their trucks; we are looking at intelligent solutions. Don’t judge us by the supply of fuel; we are working hard at all the issues and believe me I have energy to throw at everything”, he added.
Mr. Kachikwu told the audience, which included Nigerians from all walks of life that the NNPC loads 1,400 tankers for Lagos alone.
Ministers at the Town Hall meeting organised by the Federal Ministry of Information, Culture and Tourism, are: Alhaji Lai Mohammed (Information, Culture and Tourism), Babatunde Raji Fashola (Power, Works and Housing), Kachukwu (Petroleum), Geoffrey Onyema (Foreign Affairs), Okechukwu Enelamah (Industry, Trade and Investment) and Rotimi Amaechi (Transport).
The host Governor, Mr. Akinwunmi Ambode, represented by his deputy Mrs. Idiat Adebule, described the town hall meeting as the federal government’s way of getting a feedback from the people.
He said the government has made great strides in the fight against corruption and in the economy but some of the changes have not been felt because President Muhamadu Buhari has been painstaking in addressing the many problems facing the country.
“This is not the time to despair, but to keep faith with this administration. We need to focus because the gains of the ongoing efforts will start to materialise”, Ambode said.