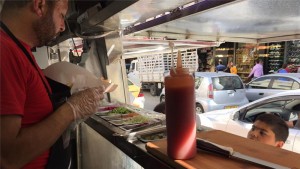 “Six shekels for a pound!” yells a sweaty man holding an aubergine, his voice drowned out by cries from other vendors at the fruit-and-vegetable market in downtown Ramallah. It is an unseasonably hot day, and a peddler selling bubble blowers shields himself from the sun with a piece of discarded cardboard as a colourful truck pulls up.

The vehicle immediately attracts the attention of several children who make a living helping shoppers carry their purchases. “I’ll take a hot dog,” a boy says to the two men who just parked, noting that at first glance, he mistook their van for an ice-cream truck. Onlookers and elderly men sitting at a cafe across the street appear intrigued. “What is this?” someone yells. “It’s a food truck,” shouts back owner Khaldoun Barghouti, a 43-year-old from Kobar, a village near Ramallah.

This is the first mobile kitchen in the West Bank.  The truck is the brainchild of Barghouti and 35-year-old Abdel Rahman Bibi, both former political prisoners jailed by Israel for nine and eight years respectively. In the years leading up to their release, they mulled over the various ways they could make a living.

“We didn’t want to be a burden on society,” Barghouti, a married father of six, told Al Jazeera. “We wanted people to benefit from our work, to develop as individuals, and to provide a service. We didn’t want to subsist on welfare.” Their vision of what the truck would look like was inspired by prison life: They hated stationary spaces, so they chose a mobile kitchen. They were so repelled by blue and brown, the Israel Prison Service’s colours of choice, that they had the truck painted in vibrant shades of red, orange and purple.