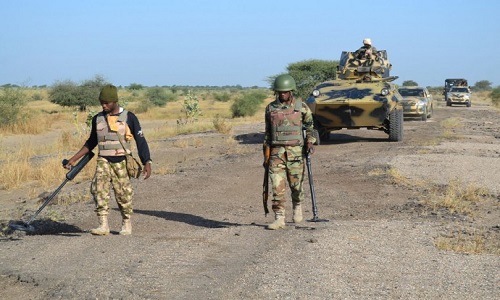 Troops of the 7 Brigade, 8 Task Force Division of the Nigerian Army, who were on clearance operation around Gratte in Kukawa LGA of Borno State yesterday killed seven Boko Haram militants including a notorious kingpin popularly known as the Albani of Monguno, the army said.

The army spokesman, Col. Sani Usman, made this known in a statement yesterday. According to Usman, the troops also seized two vehicles, seven motorcycles, one AK-47 rifle and two Boko Haram-hoisted flags among other items.

Meanwhile, the Defence Headquarters yesterday alerted members of the public to the devious tactics of fleeing remnants of Boko Haram Terrorists, saying they had laid land mines on farm lands in the North-east states.

The Defence spokesman, Brigadier General Rabe Abubakar, said in a statement that the militants had adopted the tactic in their desperation to unleash maximum terror on the people.

Mr. Abubakar also said they now operated with horses to carry out attacks on isolated villages and communities along the fringes of the Nigerian borders in the North-east.