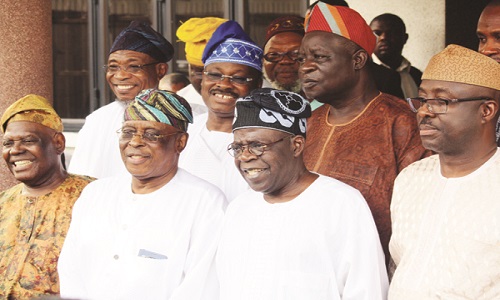 A former Governor of Ogun State, Aremo Olusegun Osoba, yesterday in a move that further strengthens the progressive bloc in the Southwest, returned to the All Progressives Congress (APC).

The former governor’s key supporters, including Senator Gbenga Kaka, also left the party for the SDP.

However, all the political disagreements that led to their defection seems to have been ironed out as all the leaders that attended the closed door meeting at the residence of Mr. Osoba in Ikoyi, Lagos, which lasted for four hours, emerged with smiles written over their faces.

Mr. Osoba sang a song in Yoruba, which he said was a favourite of late Premier of the Western Region, Chief Obafemi Awolowo: “The quarrel is ‎over, Christ has earned a victory, we shall be singing the song of victory, halleluyah, halleluyah!”

Governor Amosun did not attend the meeting, neither did he send a representative.

Governor Aregbesola, who announced the return while briefing journalists after the closed door meeting, said: “A time was when Osoba switched to another party, he was a foundation member of the APC and he was in the APC throughout my election”.

“Yes, he was for a time with the SDP, but with what we have just done today, Akinrogun Osoba, the Aremo himself is back with the progressive leadership of the Yoruba race”, Mr. Aregbesola said of the former Ogun State Governor.

He said that the leadership of progressive politics in the Western part of Nigeria on the platform of the APC had resolved all their differences.

“As such we are happy to tell the world that the leadership of progressive politics in the Western part of Nigeria is united.

“We are ready to jointly prosecute the agenda for growth, purposeful leadership, development, good governance in the Western part of Nigeria.

“The progressive leadership of the Yoruba race is now fully united and are ready and charged to lead our efforts to reposition our land and integrate with others nationwide to put Nigeria in its proper footing”, he said.
Also speaking, Tinubu said it was very crucial for the party to strengthen its front.

“I am an unapologetic progressive and I will remain one and that is the only principle I abide with”.