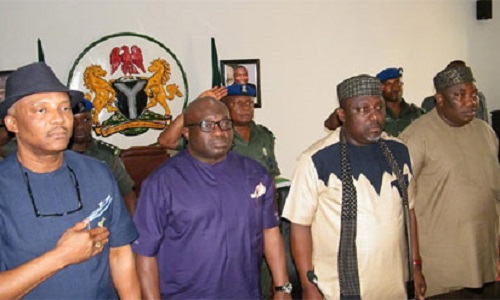 The pro-secession group, Indigenous People of Biafra, IPOB, has accused governors of states in the South East geo-political zone and politicians of trading off Ndigbo for personal and selfish political interest.
Specifically, IPOB said that by romancing the All Progressives Congress, APC-led Federal Government, the governors were doing so at the detriment of their Igbo brothers and sisters.
IPOB made this known Thursday in a statement by its Media and Publicity Officer, Mr. Emma Powerful.
The group alleged that South East governors and politicians, members and non-members of APC had so much compromised themselves or kept quiet for one political favour or the other, making them to turn blind to the killings in Igbo land by Fulani herdsmen.
The statement said: “The first attack by Fulani herdsmen in Enugu state that resulted to the arrest of over 76 persons who were searching for the whereabouts of their loved ones after the attack, and their subsequent arrest by the security agents, particularly the police and detaining them at Police Zone 9 Umuahia and subsequently arraignment was not condemned by the South East governors and politicians, and that emboldened them for the next attack in the state of Ukpabi Nimbo community in the state.
“IPOB worldwide therefore is constrained to raise accusing fingers on the Governors and politicians in the South East over the killing of our people. The Governors and the politicians used the life of their brothers and subjects to play game of politics, trading them off to the APC government for crumbs they are expecting from the government that has nothing to offer Nigerians let alone Igbo Governors and politicians.
“If that is not the case, how do you explain a situation communities were attacked and instead of the people that attacked them being arrested, the relations and victims of the attacked were arrested and detained by a government that claim to be responsible. Yet, the state Chief executives and their politicians kept quiet and were clapping and praising the government that is humiliating their people.
“IPOB, other Biafra actualization agitating groups expected these politicians, the governors, the National Assembly members and other South East political appointees and others close to the corridors of power to stoutly react against the injustice, but they never did.
“Today, we are talking about another attack that claimed the lives of over 40 persons in the same state and nothing is being done to assuage the pains of the people, while a blatant lie by the Department of State Service, DSS, that five Fulani herdsmen were killed and buried in Abia State.
“This unsettled the country, and the South East governors, and politicians were never moved by the killing of over 20 and arrest of their over 76, and now the recent killing of over 40 people at Nimbo”.