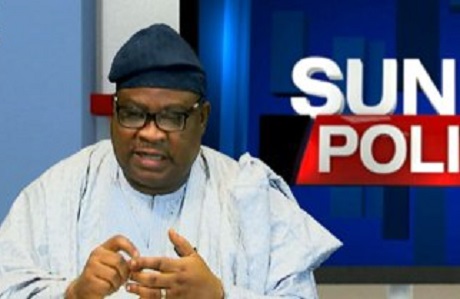 Apparently not done with spilling the beans on how the June 21, 2014 governorship election in Ekiti State was allegedly manipulated in favour of Governor Ayo Fayose, Dr. Tope Aluko, has again opened up on how the plot was perfected inside a hotel barely a week before the poll.
Aluko, who was Secretary of the Peoples Democratic Party (PDP) in the state at the time of the election, alleged that sensitive materials of the Independent National Electoral Commission (INEC), such as ballot papers and result sheets, were delivered to PDP chieftains to allow for the manipulation of the poll long before the first ballot was cast.
The former PDP scribe made these fresh allegations while speaking on a special interview programme on Wednesday on ADABA 88. 9 FM, Akure.
He claimed that the electoral materials were delivered through Akure Airport, Ondo State and taken to a hotel owned by Fayose’s Chief of Staff, Dipo Anisulowo in Are-Ekiti, where the alleged manipulation was carried out.
He said ballot papers were thumb-printed and result sheets filled by PDP members, which gave the party “undue advantage”.
Mr. Aluko also alleged that Department of State Services (DSS) operatives led by an unnamed female officer, stormed the said hotel owned by Anisulowo and arrested PDP chieftains engaged in the illegal act but they were released within three hours because according to him “we (PDP) were in government at that time”.
The whistleblower further claimed that a lorry conveying some of the electoral materials was intercepted by soldiers led by the recently retired Brig.-Gen. Aliyu Momoh but again, they were released following ‘orders from above’.
According to him, the Fayose administration received the refund of the N5.2 billion spent on Ado-Ifaki highway by the Kayode Fayemi administration but that the governor initially denied until it was confirmed by former President Goodluck Jonathan during the PDP presidential campaign rally.
He also alleged that the money was diverted to the Ado-Ekiti flyover, following the outcry generated.
Aluko said: “Ask him (Fayose) why did (former Works Commissioner) Kayode Oso flee?
“Finance Commissioner Toyin Ojo told DSS interrogators about the state’s finances, including the N5.2 billion refunded on the Ado-Ifaki Road carried out by Fayemi.
“You will recall that the governor denied receiving the refund but Ojo’s revelation made him (Fayose) divert the money for the flyover”.
Responding to questions on the threat by the Ekiti Attorney General and Commissioner for Justice, Owoseni Ajayi to prosecute him, Mr. Aluko said Ajayi is also liable for prosecution for his alleged role in an attack on a court.
He said: “I pity Owoseni Ajayi who is saying that I should be prosecuted because he (Ajayi) was the one who ‘disrupted’ the delivery of a ruling by Justice Olusegun Ogunyemi.
“Owoseni told Fayose on phone that should the judge deliver the ruling on the perjury case, it would go against him and his planned swearing-in would be in jeopardy”.
Aluko also denied that his disagreement with the governor stemmed from Fayose reneging on a gentleman’s agreement to make him Chief of Staff.
According to him, “I am not doing this because I was denied appointment. I discovered that this man has no plans for Ekiti and I went to him that ‘Oga, it’s almost a year in office now and we have not done anything for the people’.
“Fayose replied me by saying ‘don’t worry, Ekiti people are easy to deceive because by the time you buy them ponmo (cow skin) and booli (roasted plantain), you have stolen their hearts’.
“It was there that our crisis started. The issue of Chief of Staff was secondary.
“Fayose derailed from our blueprint for the development of Ekiti. He cancelled the monthly allowances for the aged.
“He imposed taxes on primary school pupils, among his other anti-people policies but when I reminded him, he told me that Ekiti people are gullible.
“I need the prayer of Nigerians so that I will not fall prey to the evil machinations of those planning to kill me by all means because of the truth I told Nigerians”.