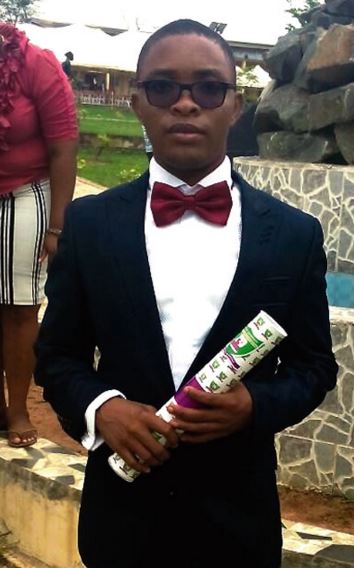 The overall best graduate of the Imo State University, Owerri in the 2012/2013 academic session, Dr. Ekenze Chigozie, finished from the Department of Optometry with a 4.71 CGPA. In this interview , he shares some of the activities that characterised his days in school

Why were you the only one who was rewarded with a car gift at the combined convocation of seven academic sessions which held in your school recently?
It was because I was the overall best the school has produced between that 2009 and now. I had the highest Cumulative Grade Point Average and that was the person the Chancellor of the school, Dr. Innocent Chukwuma, the owner of Innoson Motors, chose to reward with the gift. That was how I became the recipient of the car.

Did you see it coming?
No, I didn’t. It came as a surprise. I was shocked, likewise my mum. In fact, I didn’t know I would be the overall best until I was called a few days to the programme. When I was called, I was excited, jumping up and down and people around me knew something was happening; I couldn’t hide it. It is more heartwarming for me because I never even planned to be the best in my set. If it was something I had envisioned, and this happened, I would see it as a great reward for a good plan that materialised, but to be the overall best was not in my plan. All I wanted was to be the best in my department and faculty. I didn’t know all I did to achieve those two targets was enough to emerge as the overall best. So, beyond the car gift, which I’m grateful for, it’s a thing of joy for me to be the best in the school for the past seven years.

Have you started using the car now?
Not yet, I don’t know how to drive, but I’m planning to go to a driving school soon.

What were the decision(s) you made when you got to school that helped you eventually?
I was determined not to relate with people who could distract me. One of the things I later learnt about life as an undergraduate was how easy it could be to be distracted, usually in the name of freedom. So, I was careful with my choice of friends. Also, I made sure I had no relationship throughout, which is another distraction many students face. I started leading my class from 100 Level first semester and my least score was a 50C.

What drove you to study Optometry?
From time, I had always wanted to study medicine and surgery because I have the passion to be of help to people, especially when it has to do with their well being. Coupled with the fact that I ultimately want to save lives, medicine is a profession that is so much in demand. But I couldn’t get the course. I was offered Optometry and since it is something that has to do with health and solving people’s problems, I accepted it and it’s been a pleasant experience. I enjoyed Optometry, especially the externship programme, because it exposed me to the practicality of the profession. Physical optics was, however, somehow tasking, but it was worth it.

What is this course about?
It’s basically the practice of examining the eyes, by means of suitable instruments or appliances, for defects in vision and eye disorders in order to prescribe corrective lenses or other appropriate treatment. So, an optometrist is an eye doctor who examines eyes for both vision and health problems, and correct refractive errors by prescribing eyeglasses, contact lenses and any other treatment. Some optometrists also provide low vision care and vision therapy. It’s an interesting course because you get to know the mechanism behind vision and other interesting things about the eyes.

What was the most striking thing you found about the human eye?
The most striking for me is that despite how small the human eye is, it is very complicated. Beyond what you see on the outside, the mechanism behind how it operates is a complex but interesting one, and that is why someone would spend six years in the university studying the eye alone.

Some people tend to confuse an optometrist with an optician. What distinguishes them?
Opticians are people who specialise in the fabrication of lenses and fixing of lenses into frame, as well as the manufacturing of other ocular aids. So, theirs is strictly the production of lenses and ocular aids. They don’t examine patients. They manufacture lenses and store them in the ophthalmic laboratory, so that when the optometrist has need of them, he places an order. Optometrists are the primary health care practitioners for the eyes. They attend to patients, conduct tests to detect and treat any abnormality in the eye and if they encounter conditions that are outside the scope of the profession, they simply make referrals.

What are the common things people engage in that affect their sight?
One of them is poor hygiene and self medication. Many people think they can rush to a pharmaceutical shop and get any eye drop for use, without knowing the contraindication of such medicine. So, using a wrong drug, especially when done without a doctor’s prescription, could have an effect on the eye. There are some other practices, for example, too much exposure to some form of light, like computer screen, could affect the eyes. What we do for such people is to install screen guard or we give them a spectacle that has the screen that can shield the eyes from that radiation.

It is assumed that medicine and related courses are only for the serious-minded. How easy was it?
I can only attribute it all to God. He made it possible. I only made sure that I didn’t lag in my own way. I contributed my quota by working hard, doing my assignments with all seriousness and preparing ahead of exams. I spent extra hours studying and there was no day I didn’t go to the library. Also, sharing knowledge with my colleagues helped me a lot. When you teach others, you learn more because you want to be prepared before facing others. I wasn’t the type who went to parties or clubs and I never joked with campus fellowship meetings. So, I had to get my priorities right. The other thing is to know what works for you. I wasn’t the type who would read for so long. The much I could go was five hours at a time, but I read frequently and I used the library almost every day. In fact, my day was incomplete without a visit to the library or my personal library. So, given all the activities of the day, I didn’t deprive myself of sleep; I was sleeping for about seven hours daily.

What was your performance like in your previous schools?
I had good performance in my previous schools. It wasn’t too hard passing the West African Senior School Certificate Examination and the Unified Tertiary Matriculation Examination. I passed them at a sitting. It was just God and hard work, which was self-driven, because I don’t think I’m a genius. The way I was brought up, mediocrity was not tolerated, so I learnt at a very young age that what is worth doing at all is worth doing well. I thank God I had the best result in my secondary school and I had admission that same year. What I did when I got into the university was to maintain the momentum and apply the principles that had worked for me earlier.

How was your experience as a fresh student in your 100L?
It wasn’t really easy. We had to attend tutorials very early in the morning and it was then that I lost my dad. I almost dropped out because of financial challenges. It affected me in all areas of my life. In fact, it was in that same session that I had my least grade in school. I was emotionally unstable because I was always thinking of him. And I would always remember him anytime I had financial challenge. It got to a point that I couldn’t afford my books. I had to borrow from colleagues but when I saw that some were not willing to release their books to me, I had to engage in tutorial classes for fresh students and 200 Level students to raise some money, and it worked. It didn’t only help me financially, it also helped me academically. It made me to be more disciplined with the way I used my time, so it was either I was studying, or I was at the tutorial centre.

Were you social at all?
Yes, I was. I used to go out with friends, occasionally, and I was active in sports, especially before my 500 Level. At my leisure, I used to play and watch football, among other games. Meanwhile, my favourite social gathering was campus fellowship; I was a member of Watchman Catholic Charismatic Campus Fellowship.

Did your mother reward you for good performance?
Yes, she would buy me a soft drink (her widow’s mite) and prepare my favourite meal every semester I came back home with the best grades.

How did you cope with possible gestures from ladies?
Yes, there were such gestures but I chose my female friends carefully. I related well with everybody and helped as much as I could but I was only close to those who were hardworking and godly.

Could you recall your happiest and most embarrassing moments in school?
My best moment was my final year when I made ‘A’ in all my courses and I had 5.00 GPA. It was a dream come true. But losing in my departmental election was most disappointing.

What are your future plans?
I want to be a professor before I’m 40, and I want to be married before my 31st birthday.

What would be your advice to students?
My advice to students is that they should aim at the best, believe they can achieve it, work hard, manage their time well, be contented with what they have and make God the ultimate in their lives.