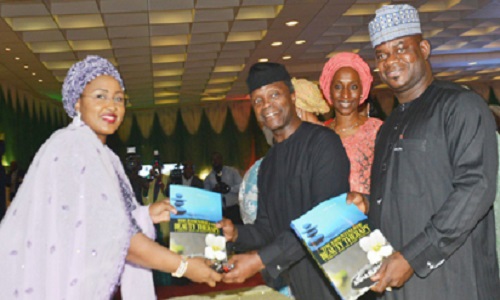 The Governor of Kogi State, Yahaya Bello, has described as “laughable”, the allegation by the Peoples Democratic Party that he donated N70 million at a recent book launch organised by the wife of the president, Aishat Buhari.
The PDP had in a tweet last Thursday via its official Twitter handle @PdpNigeria, accused Mr. Bello of donating N70 million during the launch of ‘The Essentials of Beauty Therapy’ a book written by Mrs. Buhari.

The wife of the president said proceeds from the book launch would be used to support the families of the missing Chibok girls, whose second anniversary of their abduction by Boko Haram, coincided with the event.
But a statement by the governor’s media aide Kingsley Fanwo on Sunday, said the alleged N70 million donation smacks of “laughable political desperation to brazenly slaughter truth”.
The aide, however, was silent how much was donated by the governor at the occasion.
“The book launch was organized by the nation’s First Lady to garner support for the families of the abducted Chibok girls, which was attended by Governor Yahaya Bello to lend support to the traumatized families of the girls.
“As a political leader and a parent, Governor Bello is touched by the plight of the girls and their families, hence the will to identify with the project.
“The book launch was televised to the whole world and no one announced what anyone donated. Governor Yahaya Bello did not donate 70,000,000 naira as insinuated by the people who are turning opposition politics to a comical adventure”, Mr. Fanwo maintained.
He also explained that Mr. Bello did not approach any bank for loan, saying rumors to the effect that the governor applied for a Zenith Bank loan was a distraction created by political detractors.
He said, “The spurious allegation that the Governor has applied for loan at Zenith Bank has further exposed our opponents as people who lack the basic knowledge of public accounting. Their macabre dance on the grave of ignorance has justified people’s belief that our opponents are characters are people who lack the rudiments of governance. The governor didn’t apply for loans.
“We urge our opponents to always dwell on facts when playing their games and stop toying with the intelligence of the Kogi people. Governor Yahaya Bello paid two salaries within his first fifty-seven days in office as against the four months owed by his immediate predecessor”.