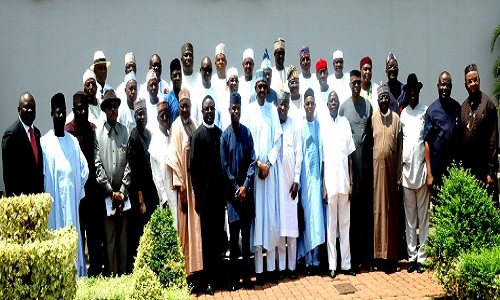 The Independent Corrupt Practices and Other Related Offences Commission (ICPC) yesterday disclosed that 16 states were yet to disburse about N57, 663, 185, 735 out of the bailout funds approved for them by President Muhammadu Buhari.
This is just as it fingered some states including Imo, Zamfara and Enugu, as engaging in diversion of the bailout funds which were meant for workers’ salaries, to other use.
Some states were yet to either collect or utilize the bailout funds as at the time the ICPC compiled its report.
Those in this category are Sokoto, Kogi and Bayelsa states.
The Commission made the disclosures in a statement in Abuja by its spokesperson, Edet Ufot, on the report of its investigation into the use of bailout funds by 23 states.
It would be recalled that President Buhari in a three-pronged relief package last July, approved the sharing of a total of N713.7 billion to cash strapped states to pay outstanding workers’ salaries.
The package involved the sharing of N413.7billion Liquefied Natural Gas (LNG) proceeds between the states and the Federal Government using the revenue allocation formula, a special intervention fund of between N250 billion and N300 billion from which states could obtain soft loans from the Central Bank of Nigeria, CBN, to pay salary arrears as well as a debt relief programme as proposed by the Debt Management Office (DMO), to help states restructure their commercial loans now put at over N660 billion.
In the document, ICPC/P.E/27/S.1, which was dated April 22, 2016, the commission said: “The report comes under ICPC Prevention mandate and states are welcome to use this initiative”.
Some states that have not fully utilized their bailout funds according to the ICPC, are as follows: Adamawa (N7,200,000,000); Bauchi (N195,011, 616m); Benue (N1,650, 084,000.520); Cross River (N4,715, 516, 959); Ekiti (N390,613, 747m); Katsina (N8,574,415,469); Gombe (N4, 361, 119,848.27); Ondo (N1, 537,575,050.32); Osun (N16, 311,765,418); Plateau (N26, 980,938.85m); Kwara (N29,862,014.92m); Oyo (N1,111,652, 408.40); Delta (2,806,911,019.50); and Kebbi (N4,463,975,420.27).
The commission said: “As part of the Federal Government’s effort to end the lingering crisis of unpaid workers’ salaries in most states of the federation, President Muhammadu Buhari approved a comprehensive relief package designed to salvage the situation through the Central Bank of Nigeria (CBN)’s Special Intervention Fund which offered affected states’ soft loans solely for the purpose of paying the backlog of salaries.
“Whereas the Central Bank of Nigeria (CBN) is yet to officially confirm this to the commission, the 27 benefiting states from the open sources are: Abia, Adamawa, Bauchi, Bayelsa, Benue, Borno, Cross River, Delta, Ebonyi, Edo, Ekiti, Enugu, Gombe, Imo, Katsina, Kebbi, Kogi, Kwara, Nasarawa, Niger, Ogun, Ondo, Osun, Oyo, Plateau, Sokoto and Zamfara.
“Following strident allegations of diversion of these bail-out funds and to avoid industrial unrest, ICPC in collaboration with the Nigerian Labour Congress (NLC) decided to monitor the disbursement of the bailout funds in the 27 benefiting states. However, relying on available sources we could only cover 23 states.
“The Independent Corrupt Practices and Other Related Offences Commission (ICPC), working in concert with the Nigeria Labour Congress (NLC), made good its resolve to monitor the bailout funds for the offset of salary arrears loaned to 27 states of the federation as approved by President Muhammadu Buhari.
“Following the conclusion of the monitoring exercise, the commission hereby wishes to issue, for public notice, the report of the exercise. The commission also will not hesitate to provide updates to this report where applicable.
“It is important to note that the monitoring exercise report and probable updates are being released to the public by the ICPC to foster understanding between workers and the state governments by providing a transparent process that eliminates information gaps that often lead to rumour-mongering.
“The commission is convinced that this will promote a healthy atmosphere for interaction between the parties on the matter”.