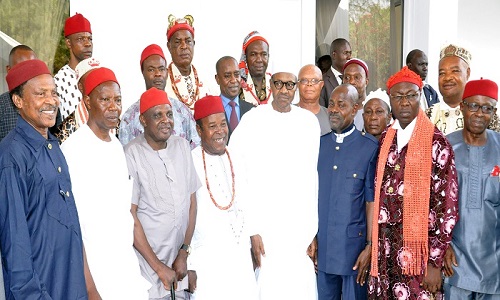 Ndigbo in the 19 northern states and the Federal Capital Territory have told the Presidency that the Igbos did not declare war on Nigeria in 1967.

They were reacting to the assertion by the Special Adviser to President Muhammadu Buhari on Media and Publicity, Femi Adesina that the old eastern region declared war against the Nigerian state in 1967, which led to the civil war.

Mr. Adesina had on Friday, April 1, 2016 on an Africa Independent Television (AIT) programme, while responding to questions on why Mr. Buhari refused to negotiate with pro-Biafra agitators, said “Ndigbo in 1967, in the name of Biafra, declared war against the Nigerian nation seeking for secession and over two million people died”.

In the same programme, the presidential spokesman had faulted those criticizing President Buhari for not visiting Agatu in Benue State to sympathize with victims of the alleged Fulani herdsmen massacre, saying his principal’s position on the tragic incident had been made known, hence, he did not have to undertake an on-the-spot assessment of the crisis area.

Reacting to Adesina’s defence of Buhari on the two issues, Ndigbo in the 19 northern states and FCT under the aegis of Igbo Delegates Assembly (IDA), described the presidential spokesman’s comments as “careless, irresponsible and lacked the touch of intelligence”.

The IDA General Secretary, Comrade Austin Ofokansi Ifedinezi, made this known in a statement yesterday.

Ifedinezi said: “The truth that must be told is that Ndigbo never declared war against Nigeria. Ndigbo never asked for secession. Ndigbo were summarily invaded, killed, maimed, their lives, property destroyed and desecrated by the then Nigerian troops. Where did the war take place outside Igboland? Somebody should be gracious and honest to tell me.

“The continued conspiracy, propaganda, neglect, hatred and marginalisation of Ndigbo by the likes of Femi Adesina is at the perils of the growth of Nigeria and can never dampen the highly spirited Ndigbo but rather encourage them the more against the intentions and negative plots of their haters. Ndigbo are blessings wherever you find them and are very much available to do the exploits for the economic and social growth of the environment.

“Ndigbo never asked for secession, rather we were on self-defence of our dear lives and property in the Eastern Region from 1967 to 1970, as the only alternative/option left. As students of history, we know those who met in Kaduna shortly before the July 29, 1967 coup and unanimously decided to secede”.

“Gen. Yakubu Gowon was heading to the media to declare the secession of the North but for the intervention and counsel of the British government that that option was not viable and would be suicidal. This was why it took three days, to adjust (29/07/67 to 01/08/67) for Gowon to assume office as the Head of State of the Federal Republic of Nigeria”, he said.