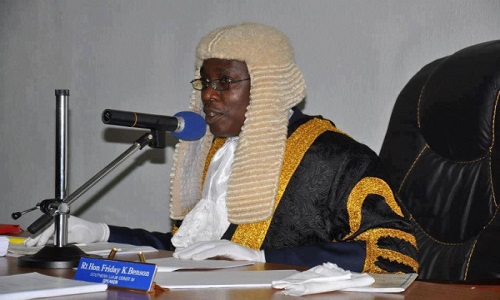 Ijaw youths have called on the Bayelsa State House of Assembly to swear-in three opposition lawmakers, who won judgment at the Court of Appeal, without further ado. Alfred Belemote (APGA, Brass 2), ‎Gabriel Ogbara (ADC, Ogbia 2) and Gibson Munalayefa (LP, Ogbia 2) were denied admission to the House two months after securing victory at the appellate court.

The Ijaw Youths Council, IYC, which made the call on Wednesday at a press briefing addressed by its President, Comrade Udengs Eradiri, in Yenagoa, the Bayelsa State capital, condemned the exclusion of the three lawmakers, despite receiving their certificates of return from INEC.

According to the IYC, the continued exclusion of Messrs Belemote, Ogbara and Munalayefa from the activities of the State House of Assembly was unfair and an injustice to the constituents they represent.
“The non-swearing in of the three honourable members who are Ijaw people and Bayelsa people have become a matter of concern and I call on the leadership of Bayelsa House of Assembly to swear them as a matter of justice.

“Information at our disposal indicates that they already have their certificates of return. It is injustice to them and their constituents because issues concerning their constituencies are not discussed at the Bayelsa House of Assembly.

“That alone negates the oath of office of the speaker, who took an oath to protect the rights and interests of our people; and when you trample upon the rights of the people it is unacceptable.

“We urge the speaker of Bayelsa Assembly to do what is right and swear them in. We have received complaints from the constituents who are Ijaw people; there cannot be injustice orchestrated by Ijaw people against Ijaw people”, Mr. Eradiri said.

Speaker of the Assembly, Kombowei Benson, declined comments on his alleged refusal to swear in the lawmakers-elect while the Commissioner of Information, Jonathan Obueibite, distanced Governor Seriake Dickson from the controversy, saying the governor never meddled in the affairs of the legislature.