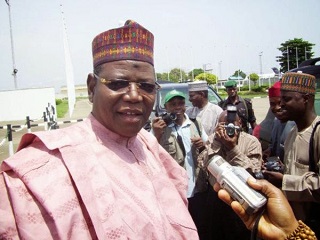 The immediate past Governor of Jigawa State, Alhaji Sule Lamido, Monday said he would vie for the Presidency on the platform of Peoples Democratic Party (PDP) in 2019.
Lamido made this known to newsmen in his village – Bamaina – in Birnin-Kudu Local Government Area of the State.

He, however, said a party’s ticket was not given to anybody on the platter of gold, adding that a candidate must earn it.

“If my party finds me worthy of the party’s presidential ticket to serve Nigeria, I will thank God and oblige.

“Although there are issues in the party that we are all working to resolve, we hope to have success soon and come out united.

“As I’m talking to you now, we are working silently to resolve our differences and bring back to our fold those that left the party for APC”, he said.

The ex-governor held that the internal crisis rocking the PDP was the reason for its defeat in 2015 general elections.

He, however, said that the PDP had the capacity to rule the country again but the members must work hard to achieve that.

Mr. Lamido also denied any rift between him and his successor, Gov. Muhammad Badaru of APC.

He stated that both of them had mutual respect for each other and he had no differences with him other than political ideologies. (NAN)