I’m Still Not Convinced On Benefits Of Naira Devaluation – Buhari 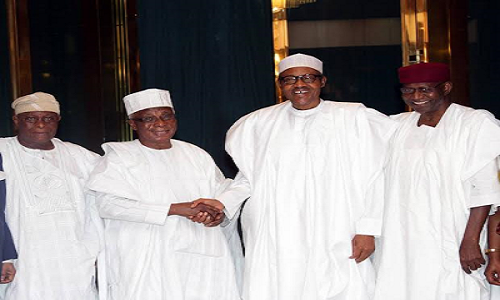 President Muhammadu Buhari on Friday insisted that he was yet to be convinced on the benefits of devaluation of the Naira to vast majority of ordinary Nigerians.
He made this assertion on Friday when members of the Council of Retired Federal Permanent Secretaries, paid him a visit at the Presidential Villa, Abuja.
Buhari, who has been under intense pressure to devalue the nation’s currency, recalled that the Naira was still strong against the U.S Dollar and other foreign currencies when he was military head of state until he was toppled in a military coup in 1985.
“When I was military Head of State, the IMF and the World Bank wanted us to devalue the Naira and remove petrol subsidy but I stood my grounds for the good of Nigeria”, the president was quoted as saying in a statement by his Special Adviser on Media and Publicity, Femi Adesina.
“The Naira remained strong against the Dollar and other foreign currencies until I was removed from office in August, 1985 and it was devalued.
“But how many factories were built and how many jobs were created by the devaluation?
“That is why I’m still asking to be convinced today on the benefits of devaluation”, President Buhari told the retired Permanent Secretaries led by Otunba Christopher Tugbobo.
He welcomed the Council’s pledge of support for the successful implementation of his administration’s Change Agenda, especially in the priority areas of improving security, curbing corruption and revitalizing the national economy.
He added: “I am glad you have rightly identified the key issues we campaigned on.
“We need a dynamic bureaucracy which will not mislead us into taking wrong decisions”, the president said.
The Council of Retired Federal Permanent Secretaries was established in 2004 to serve as a platform for retired permanent secretaries to offer constructive advice to government on key policy issues.
Chief Philip Asiodu, the Pioneer Chairman of the Council, said that its members want the present Administration to succeed because Nigeria has already lost many opportunities for progress.
Asiodu told Mr. Buhari that his group was non-partisan, adding “The interest of Nigeria is paramount to us and we are anxious that you should succeed”.

The Independent National Electoral Commission (INEC) has rejected the Akwa Ibom rerun election held on Saturday. This was made known in a statement on Tuesday...
Read more

Following the rate of insecurity in the country, accompanied with massive killings, the Senate Minority Leader, Senator Enyinnaya Abaribe has asked the President Muhammadu...
Read more

Babagana Zulum, governor of Borno state, says telling the truth and accepting the truth has been a major problem in Nigeria. The governor said this...
Read more
- Advertisement -