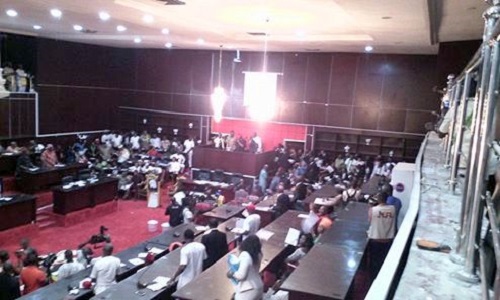 Three members of the Imo State House of Assembly have been suspended for participating in what their colleagues termed “clandestine meetings”.
The suspended members are Ngozi Obiefule (Isu, APC), Obinna Egu (Ngor-Okpala, PDP), and Lawman Duruji (Ehime Mbano, APC).
“Their suspension is indefinite; they will remain suspended until a committee set up to investigate their activities turns in its report”, said the Speaker, Iheanacho Ihim, on Wednesday.
He alleged that the House had witnessed “clandestine, unpatriotic and selfish meetings by the trio against the Imo State Government and the leadership of the House”.
According to him, owing to the activities of the trio, all efforts to bring stability to the House had failed.
“Their return will be determined by the recommendations of the investigating committee”, he said.
Meanwhile, the Peoples Democratic Party (PDP) members in the House have requested the speaker’s permission to change occupiers of some key positions.
According to the letter, the changes have become necessary due to “obvious incompetence in relation to duty”.
The changes, which were effected immediately the request was granted, saw the removal of Obinna Egu (PDP, Ngor-Okpala) as Minority Leader with Ken Agbim (PDP, Ahiazu Mbaise), as his replacement.
The changes also swept Emma Orie (PDP, Ohaji Egbema) into the Minority Whip seat, following the removal of Mike Iheanetu (PDP, Aboh Mbaise).
Bruno Ukoha of Ezinihite Mbaise was named Deputy Minority Leader, while other positions were yet to be filled.
(NAN)