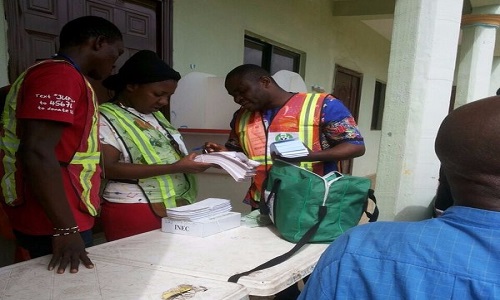 The Independent National Electoral Commission (INEC) has fixed Wednesday for re-run elections in 39 polling units within the Federal Capital Territory (FCT) to complete the council elections in areas where elections were cancelled.
This is contained in a statement by the FCT Resident Electoral Commissioner, Jacob Jatau, on Monday in Abuja.
INEC had declared elections in Kuje, Abuja Municipal Area Council (AMAC), Gwagwalada and Abaji Area Councils inconclusive.
“INEC-FCT will on Wednesday, April 13, conduct re-run elections in 39 polling units in 20 Registration Areas (RAs) of the Federal Capital Territory.
“Results in the affected polling units were cancelled for reasons ranging from violence, over voting and non-use of Smart Card Readers or accreditation of voters”, he said.
The statement said accreditation and voting in the affected polling units would begin simultaneously from 8am to 2pm.
The commission therefore called on the political parties and their candidates to toe the path of peace to ensure the conclusion of the elections.
Nick Dazang, INEC’s deputy director of Publicity and Voter Education said adequate security measures had been provided for the re-run elections.
“There will not be restriction in the movement of people as areas affected are not many but certainly there will be presence of security to secure the area”, Mr. Dazang added.
(NAN)