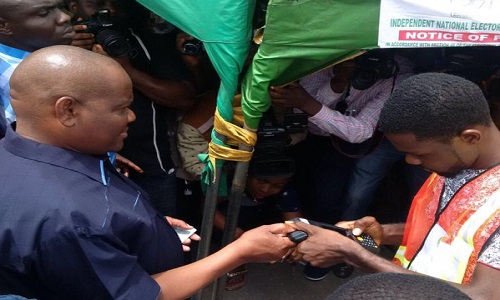 Governor Nyesom Wike of Rivers State has raised the alarm over an alleged plot by the Independent National Electoral Commission (INEC) to release some of the results in the eight local government areas it earlier cancelled in the March 19 legislative re-run elections in the state.
He, however, warned of dire consequences if the INEC attempts to cancel results of Ikwerre Local Government where his predecessor and current Minister of Transportation, Chibuike Amaechi hails from, saying the Peoples Democratic Party (PDP) candidates won the re-run polls in the area.

Wike, who spoke in an interview with THISDAY in Port Harcourt, the state capital yesterday, said he had information that the electoral commission was planning to release some of the results in the eight local government areas where it earlier suspended elections.

“How can they have results for a process that was ongoing when it was cancelled by the same INEC? Where did the result surface from? Their claim now is that some of the results in the eight local governments they cancelled were already collated and I ask how was it possible when it was cancelled when voting was still going on by 2pm? This is fraud on the part of INEC. INEC is trying to help the APC by manipulating the result. The APC lost badly in Rivers so they want to help Minister of Transportation, Chibuike Amaechi to save his face”.

Gov. Wike accused INEC of trying to subvert the will of the people as expressed by the voters in the re-run elections.

“As I said before, INEC has not showed any sign that they are impartial. They have not shown signs of that. Notwithstanding, we have raised complaints and they have seen that our complaints are genuine. So why are they running away from it. Why?”

He claimed that INEC was using the cover of the suspended election to perfect plans to rig elections in the eight local government areas in favour of the APC.
Wike said: “I foresee a situation where all they are doing now is to perfect a system where they will now want to rig us out. Just like I said, that will also be highly resisted. So, no one will say that there is crisis in Rivers State.

“INEC should not be causing crisis in Rivers State, INEC should allow the people’s will to prevail. I will not fold my arms and allow INEC to perfect that strategy they want to use and rig in those eight local government areas. Rivers State will still resist it. If I die in the cause of Rivers state, no big deal about that.

“If I die for it, it is a sacrifice I can make for Rivers State as Rivers State cannot be cheated any longer. Allow the people’s will; allow their mandate to stand. Don’t try to satisfy an individual whom you think might have contributed so much amount of money to a political party. The people will decide where their votes will be and so we will resist it with all it takes”.

The governor specifically accused the electoral umpire of deliberately refusing to release the result of elections in Ikwerre state constituency and Ikwerre/Emohua federal constituency because the APC lost in Amaechi’s home constituencies.

He said: “Yes, he (Amaechi) lost in Ikwerre Local government and that is why they are playing games; INEC is trying to play games, particularly one national commissioner, Amina Zakari. She is the brain behind all these problems you see in Rivers State. She has been tele-guiding and manipulating. In fact, I can tell that one of the monitors wrote condemning the attitude of Amaechi during that election. Amina scolded the supervisor for writing a report against Amaechi. We intercepted all those information. Indeed, most of the result swapping that INEC tried to do in Rivers State emanated from Amina Zakari”.
He vowed that the people would resist any attempt by the commission to cancel the results as they had already been collated at the centres.
“So, not releasing Ikwerre is a bone on their neck. But I dare them. Let them try to say they are cancelling Ikwerre Local Government. You cannot cancel what has been collated from the unit to the ward. You cannot do that. That result must be released. If they don’t want crisis, that result must be released. We will not fold out hands. It doesn’t matter. No threat will make us to forgo that.
“We trounced Amaechi in his local government. He failed. And let be said he failed. Let the whole world know that he failed. What are you protecting him for? You should protect the votes of the people and not a single individual”, Wike said.
He said the INEC was sympathising with the minister and was shielding him from embarrassment.