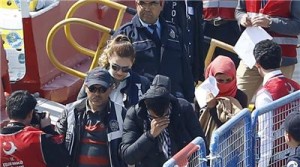 At least five people, including a child, drowned on Saturday after their small vessel carrying Iraqis and Afghans capsized in the eastern Aegean Sea, the Greek coastguard told Al Jazeera. The latest boat disaster comes a day after 124 people were sent back to Turkey from Greece, as part of the second wave of deportations under a controversial EU-Turkey deal aimed at curbing the refugee flow to Europe.

The Greek coastguard said the five victims – four women and a child – were found in the early hours of Saturday northeast of the Greek island of Samos. Two men, two women and a child were rescued and were brought to a hospital in Samos.

Among them was a Turkish national, who is believed to be a people smuggler, the spokesperson, who spoke on customary condition of anonymity, said. “According to those rescued, there were 14 people overall on the inflatable boat,” she added. A search-and-rescue operation involving patrol boats and helicopters from the Greek coastguard and the European border agency Frontex was under way for any survivors.

“This horrific tragedy is a sad reminder that people will continue risking their lives, and those of their children,”  Eva Cossé, Greece specialist at Human Rights Watch, told Al Jazeera. ‘It is also a reminder of the great need for safe and legal routes to the EU.”