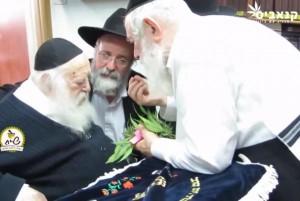 An ultra-Orthodox rabbi announced an addition to the list of substances approved as kosher for Passover: medical marijuana.

Rabbi Chaim Kanievsky, a Belarusian rabbi living in Bnei Brak, Israel, responded to a question from pro-marijuana group Siach with a confirmation that medical marijuana is kosher to be smoked or eaten during the eight-day Passover festival, which has its own set of dietary rules.

Kanievsky is widely considered to be the current leading authority on ultra-Orthodox Halakha, or Jewish law.

A video posted to YouTube by the pro-marijuana group Cannabis Israel shows Kanievsky and Rabbi Yitzchak Zilberstein declaring some marijuana leaves to have a “healing smell” and saying a blessing over the plant.

Rabbi Efraim Zalmanovich of Mazkeret Batya, Israel, said in 2013 that smoking medicinal marijuana is kosher, but recreational use of the plant is not allowed.