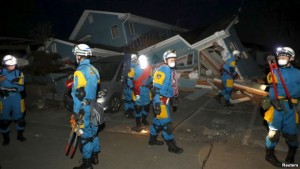 A major earthquake rocked southern Japan on Friday for the second day in a row, in the same region where a quake hit on Thursday, killing nine people. The new quake struck near Kumamoto on the island of Kyushu with a magnitude of 7.0, the U.S. Geological Survey said. Some news reports said it had a magnitude of 7.4.

A tsunami warning was initially given, but later lifted. According to a report by ABC News late Friday, at least four people were killed by the 7.0 magnitude quake. CNN reported at least one person dead. The quake caused heavy damage on Kyushu island, where nearly 200,000 homes lost electricity. Japan’s Chief Cabinet Secretary Yoshihide Suga said the damage caused by the earthquake was substantial.

Suga said more than 50 people remained trapped and nearly two dozen buried alive, ABC News reported. Nearly 500 were injured — 44 of whom are critically hurt.  ABC’s report also said fires and a landslide followed Saturday’s earthquake, which itself was followed by aftershocks into Saturday morning, one measuring a magnitude of 4.8. Rescuers are searching for survivors in buildings that have suffered catastrophic damage.

Japan’s Defense Minister said about 20,0000 soldiers will be called into service this weekend to help in the rescue efforts. Friday’s quake is the second major tremor to hit the area in as many days. A 6.2 magnitude quake struck the same island Thursday, killing 9 people and injuring hundreds more. “No question, this is a large and very important earthquake,” Doug Given, a geophysicist with the USGS, said. “And it will do a lot of damage.”