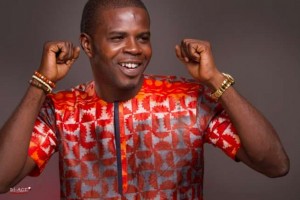 A new video has gone viral on Twitter, of JJC Skillz’s mum, praying for fiancee, Funke Akindele, even as the singer turned a year older today.

The video which was posted today, April 4, 2016, shows the singer and his Nollywood actress beau amongt friends and family, including his mother who took time out to bless and pray for them.

She seriously prayed that Akindele bear her kids, following the reports that the couple are working on their wedding plans.

The couple who had begun dating earlier this year, have been inseparable in recent times, with frequent trips to London where they are reported to be keeping their relationship under wraps.

Skillz and Akindele had gotten engaged soon after they began dating, even as Entertainment Express reported that Akindele had been overwhelmed by the proposal of the singer and was moved to tears when he popped the question.

Their marriage will be 39-yrs-old Akindele’s, second and 38-yr-old Skillz, first.