Home Metro News Jonathan Did His Best On Security While He Was President, Group Says
Facebook
Twitter
WhatsApp 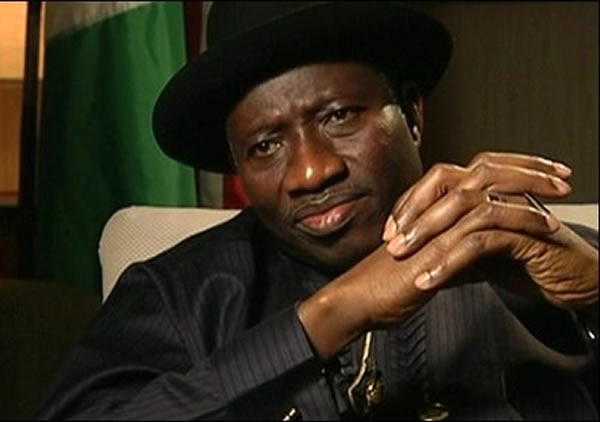 The Africa Arise For Change Network has applauded former president Goodluck Jonathan for doing his best to ensure the security of lives and properties of Nigerians while in power.

Addressing journalists in Abuja, National President of the group, Mrs. Nkechi Odoma noted that Jonathan deserves to be commended for not allowing the Shiite Sect in Nigeria metamorphose into another terror group in the polity.

Odoma also frowned at the coordinator of the Every Nigerian Do Something project, Dr. Peregrino Brimah for casting aspersions on the person of Jonathan in spite of his contributions to the stability of the nation during his tenure.

Odoma was reacting to a recent article by Brimah, where he attacked former President Goodluck Jonathan, ex-Army Chief, Lieutenant General Azubuike Ihejirika (rtd)’s performance when they were in charge.

“Ordinarily, one should ignore the narrative offered by this man but the fact that the implied mischief in the opinion piece dressed up to pass as news feature was too dire to dismiss. Brimah apparently had his sight on former President Goodluck Jonathan but the title and wording of his piece futilely attempted to throw a cursory reader off the scent of his intended target by making it look like he was targeting the Chief of Army Staff, Lieutenant General Tukur Buratai,” Odoma said.

“Brimah’s call for General Buratai’s sack was an afterthought as the true object of his vituperation was Dr. Jonathan who had repeatedly refused to give in to the kind of blackmail that Brimah who prides himself as a so-called political observer must have been aiming to score. “He should have simply joined the on-going chorus that blames Jonathan for all the ills of the world and it would be fine. But to attempt rubbishing Jonathan’s record for kicking off the fight against extremism is purely irresponsible.” The group said Nigerians should therefore, be commending Jonathan’s unique foresight that those propagating extremism were brought to order early enough.

“It will seem he erroneously thinks Jonathan and Ihejirika are still in office hence the rabidity with which he continues to attack the Army as an institution. We therefore call on Dr. Brimah to immediately stop his rabid attacks on the person of former President Jonathan. He should leave retired General Ihejirika alone. Dr. Brimah should let those who risked their lives to secure Nigeria alone.

“It is not everyone that is making the mistake of buying into his intellectual backing for terror. Our hope is that the present government will take the necessary actions when we expose Brimah and his sponsors. The government of the day must not keep quiet at that point simply because it is a former President that is being harassed now,” Odoma said.