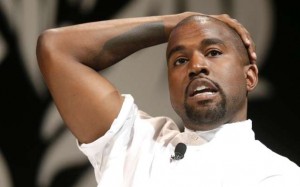 Controversial American rapper, Kanye West has revealed that he had no cell phone until his wife, Kim Kardashian decided to marry NBA star Kris Humphries, and not him.

On an upcoming episode of ‘Kocktails With Khloe’,  the rapper admits that he did not own a cell phone prior to 2011, and the only reason he bought one was because of Kim’s ex-husband.

“I got a phone because somebody decided they wanted to marry Kris Humphries,” the 38-year-old entertainer said. “I wasn’t up to anything, and I looked on the internet, and there was Kim Kardashian with some extremely tall person, and I was like, I need to call her or something.”

“I started sending her pictures of certain basketball players that used to be cool, that now they wear their pants all the way up to here,” Kanye continued, as Kim, Khloe, John Legend and Chrissy Teigen looked on. “Like, ‘This is your future!’” he added