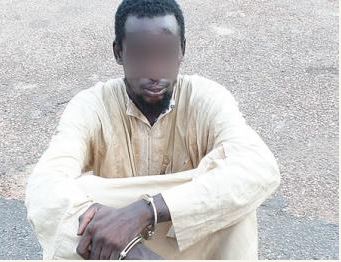 The membership of a notorious kidnap gang operating in Oke Ogun axis of Oyo State was recently depleted by the Oyo State Police Command when it nabbed two of them in a village near Kishi town after a kidnap operation. But one of the two suspects got a dose of the medicine they force down the throats of victim when the leader erroneously shot him while attempting to kill their victim who recognised him.

Disclosing this to Crime Reports in Ibadan last week, the state Commissioner of Police, Leye Oyebade, said the two suspects, Umoru Sidi and Umoru Bawa, who are both Fulanis, were apprehended after they invaded the home of one Alhaji Mohammed Barmo at Geesi Village, via Kishi at about 10.00 p.m. and ferried him to an unknown place.

According to the police commissioner, the kidnappers later demanded for N15 million ransom as a condition for his release. One Tambaya, who is the leader of the gang and the mastermind of the crime, as well as a cousin to the victim, however, attempted to kill Alhaji Barmo when he noticed that the victim recognised him.

“Tambaya fired shots at the victim to eliminate him, resulting in Barmo sustaining serious injuries in his right arm,” Oyebade stated.

Unfortunately, Crime Reports learnt that one of the gang members, Umoru Sidi, was also accidentally hit by the bullet. With the belief that Barmo was dead, Tambaya reportedly left the scene, abandoning both his cousin and his injured gang member.

The police commissioner stated further that when his command got the report, the Anti-Kidnapping Squad was put to task to uncover those behind the crime and fish them out.

“Through intelligence network of the command and the investigation carried out by our crack detectives, two members of the notorious gang, Umoru Sidi (22) and Umoru Bawa (36), were arrested in their criminal hideouts.

“Preliminary investigations revealed that before the arrest of the duo, the gang was responsible for the spate of kidnappings in Oke Ogun area of Oyo State. Tambaya is still at large,” Oyebade explained.

The police boss expressed delight in the new anti-kidnapping law enacted by the Oyo State government. According to him, “the new law that is effective with regards to kidnapping in Oyo State will make crime unprofitable. We are going to ensure that we implement it with proper investigation and diligent prosecution of cases that fall under kidnapping.

“This is sending out signals to those that want to still get themselves indulged in the acts of kidnapping to steer clear of Oyo State.”

Speaking with Crime Reports through an interpreter, Umoru Bawa revealed that he was arrested at Bode Saadu where he went to hide after his gang’s operation. Bawa who confessed to the kidnap, said they picked Bardo and wanted to go and keep him in a place for ransom.

“I am from Jega Local Government Area of Sokoto State. I am a farmer and herdsman. I was not there when the kidnap was initially planned but I was later invited and I agreed to join them. I was not the one who demanded ransom so I don’t know how much Tambaya demanded. We were about eight or nine that carried out the operation but I can’t remember all their names. But there were two people bearing Tambaya among us and another one bearing Ali.

“I don’t know why Tambaya shot our victim and I don’t know his current whereabouts. He was based in Kishi before the operation,” Bawa narrated.

Crime Reports gathered that the second suspect, Sidi, was on admission in the hospital, as the bone of one of his legs was shattered by the pellets that hit him. A source disclosed that the injury was so bad that Sidi’s leg might be amputated.