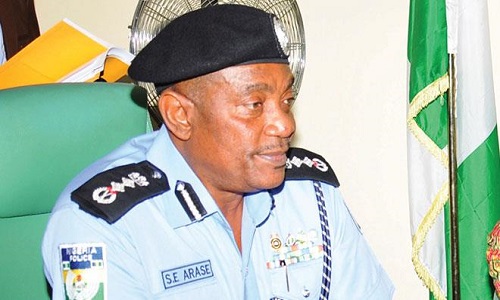 The House of Representatives Adhoc Committee on the Kogi State Assembly Crisis on Thursday grilled the Inspector-General of Police, Solomon Arase, over the re-opening of the House of Assembly complex.
The House had through a resolution directed Mr. Arase to seal off the Kogi Assembly until a peaceful resolution of the crisis that trailed the impeachment of Speaker Lawal Momoh-Jimoh was reached.
Mr. Jimoh was on February 16 impeached by five out of 20 lawmakers, who subsequently chose Umar Imam as the new speaker.
Following the National Assembly’s directive, the five members, who allegedly impeached the speaker, convened and conducted legislative activities within the chamber in disregard of its resolution.
The committee, chaired by the Majority Leader, Femi Gbajabiamila, however described the failure of the police boss to comply with the resolution as breach of the Nigerian Constitution and undue interference on the activities of the legislature.
Mr. Gbajabiamila also decried the absence of Abubakar Malami, the Attorney General of the Federation, at the meeting.
The committee, however, resolved that the AGF should appear in person on Monday, April 22, by 2 p.m.
Speaking on the outcome of the investigative hearing conducted behind closed door, Mr. Gbajabiamila said “It was straight to the point; all the House wanted to know was why the resolution of the NASS was disobeyed.
“And also why the State Assembly was reopened.
“The IG gave his explanation, saying he had sought the advice of the Attorney General and the Attorney General gave him his advice.
“I think we are making good steady progress and I think we would put this matter to a conclusion next week”, he said.
While reacting to inquiry on whether the inspector-general was going to close down the Assembly, the majority leader said “We are not there yet, as you know the hearing is a process.
“This is the first day and there are several sides to it. We have taken the deposition of the IG, the Attorney General will be with us on Monday.
“The resolution of the House was not to go back to status quo. The resolution of the House was to conduct a hearing to find out why it hasn’t happened and we are getting there”, he said.
Also speaking after the meeting, Mr. Arase apologised to the leadership of the House, pledged allegiance to the Presidency, explaining that he solicited the advice of the AGF mainly on administrative issues.
Mr. Arase, who spoke at the end of the public hearing, assured that the matter would be addressed.
He blamed the misunderstanding on what he called breakdown in communication.
“It went very well; we were able to understand ourselves that there was a communication breakdown. I wouldn’t do anything to breach the constitution.
“I am a law abiding officer. I am sworn to the constitution to obey the constitution. There was a break down somewhere but we will resolve it”, Mr. Arase said.
(NAN)