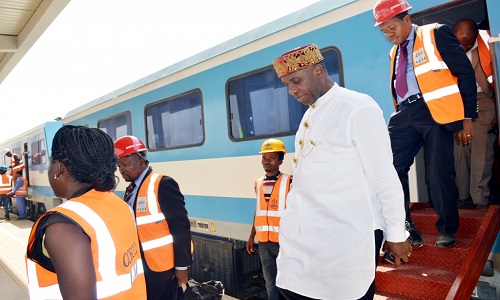 The House of Representatives, on Monday, maintained its position that it did not expunge the Lagos-Calabar rail project from the 2016 budget, accusing the Minister of Transport, Rotimi Amaechi, of an attempt to pad the Appropriation Bill.
The Lagos-Calabar rail project, which is jointly-funded by Nigeria and China, became a topic of heated debate on Monday as Nigerians, including some members of the National Assembly, were divided on the issue.
While the Chairman, House of Representatives Committee on Appropriation, Hon. Abdulmumin Jibrin, said the project was not included in the original budget proposal submitted by President Muhammadu Buhari to the National Assembly last December, some of his colleagues disagreed.
The member representing Abi/Yakurr Federal Constituency in Cross River State, Bassey Eko Ewa, expressed surprise that the project that will benefit the people was removed from the budget.
“I am so surprised to hear this”, Hon. Ewa said yesterday. “How will it not be in the budget? The money that was appropriated to it, where is it?”
The lawmaker, however, said if the allegation was true, it may have happened at the compilation stage done by the Appropriation Committees of both chambers of the National Assembly and promised that lawmakers from Cross River State will take it up with the leadership.
But the spokesperson of the House, Abdulrazak Namdas, in a press briefing in Abuja, said there was no project as Lagos-Calabar rail project in the budget proposed by the executive.
He said it was Mr. Amaechi who “brought” the project.
“The item was brought for inclusion in the budget by Minister of Transportation, Rotimi Amaechi, but was not included in the budget because only the president is allowed to present the budget before the National Assembly”, Mr. Namdas said.
“The media is awash with story that the National Assembly has removed the Calabar-Lagos railway project from the budget.
“I want to make it very clear that we don’t have that in the presentation made by the President to the National Assembly, so we couldn’t have removed what was not even inserted in the first place.
“It was the Minister of Transport that brought the Calabar-Lagos railway to be included in the budget.
“We want to state clearly that the budget is something that is proposed by the president; we do not receive budget from minister.
“So, for somebody to say we actually removed the Calabar-Lagos railway project from the budget, I think someone is trying to spoil our good image.
“We want to state again that all that was sent to the National Assembly from the supplementary budget and others had a smooth sail, and it is on record that some people lost their job because of this budget”.
He said the National Assembly had not received any notice that the president will not assent the budget over allegations of missing projects.
He said the president could still notify the National Assembly if there’s any item he would want to be included in the budget and assured of the legislature’s cooperation.
Earlier on Monday as the controversy raged, the Chairman, Senate Committee on Land, Gbenga Ashafa, had confirmed that while the Lagos-Calabar rail project was not included in the original budget proposal submitted by the president, it was submitted as Ministry of Transport’s supplementary proposal.
Mr. Ashafa said his committee therefore approved the project during the ministry’s budget defence and passed it to Appropriations Committee chaired by Danjuma Goje.
He, however, expressed surprise that the project was not included in the final draft by the Appropriations Committee.