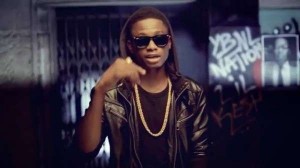 Fast rising singer, Lil Kesh whose contract with YBNL expired two weeks ago has started his record label while also clearing the air over rumours of him leaving YBNL.

“Ok so it’s true that my contract ended about two weeks ago like we all know my contract with YBNL was for two years but that’s the business side to it. And did I state that my contract included 3 videos for me and one album? But Baddo went out of his way to shoot about 5 videos for me. Business or no business YBNL is family and will always be till I go 6ft under the ground. YAGI records is real with the support of my big bro olamide, YBNL remains my management for life, YBNL doesn’t just produce successful artists it produces artist that will help produce other successful artists. That’s the dream Baddo shared with me about a year ago.”

“Good day guys, sorry we didn’t put guys in d loop… Maybe cause we see no point in bringing it up cause family is family business or no business. I signed 2 year deals with Viktoh and Kesh, it ended weeks ago… But the bond is 007 leave it (james bone level). Don’t touch it. Kesh got his own record label now #YAGI but still works with YBNL Mngnt. Viktoh is still under YBNL Mngmt too. So worry not. The world is our for the taken. #YBNL #FamilyForEver”