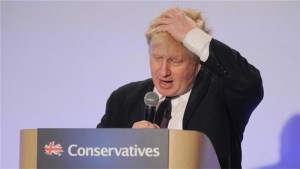 London Mayor Boris Johnson has caused controversy in the United Kingdom by claiming that US President Barack Obama has an “ancestral dislike” for Britain as a result of his “part-Kenyan” heritage. His comments came after Obama, on a London visit, angered proponents of a so-called Brexit by saying the UK is better off by staying in the European Union.

In an opinion essay published in the right-leaning tabloid The Sun, the mayor criticised Obama’s eagerness to urge British voters to remain in the EU and argued that the president may be “anti- British”. Johnson, who is seen as the unofficial leader of the campaign for the UK to leave the EU, claimed in his article that Obama removed a bust of Britain’s war-time prime minister Sir Winston Churchill from the Oval Office shortly after he took office in 2009.

However, his remarks about Obama’s heritage did not score Johnson any points in the EU discussions. Instead, he was branded “racist” by several prominent MPs. Tory MP Sir Nicholas Soames, who is the grandson of Sir Winston Churchill, said Johnson’s comments were “appalling” and “totally wrong on almost everything”. “Time and time again, his judgment is awry and he shows in this article a remarkable disregard for the facts, the truth and for all judgment,” he told LBC radio. “I don’t think Boris has the stature to be leader.” Sir Nicholas also said it was inconceivable that Churchill would not have welcomed the views of Obama.