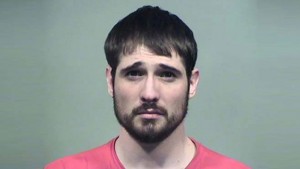 A Warren man was arrested after police said he fired a weapon several times in his home because he was afraid his home was being burglarized. William Chesser, 28, is charged with discharging a firearm in city limits. Chesser called 911 to his Kenmore Avenue home in reference to a possible burglary in process. He was waiting for help in a car with his neighbors at the intersection of Willard and South Street when officers arrived.

According to the police report, Chesser said he heard knocking on his windows, cars driving up and down past his house and other noises coming from inside his home. He then got paranoid and ran upstairs into one of his bedrooms, where he jumped out of the two story window and ran over to his neighbor’s house.

As officers were checking the house, Chesser and his neighbors stayed in the car. According to the police report, a second story window was open and another was broken. The front door was kicked in. As officers walked into the home to check if anyone was injured inside, they could smell gun powder and see smoke. The drywall leading up the stairway had bullet holes throughout it. At the top of the stairs, an AK 47 was laying on the floor in the hallway along with rifle casings. A .38 special revolver was also located.

When the house was cleared, officers spoke with Chesser about the guns. Chesser said he used both guns to fire several shots throughout the home because he was scared someone was breaking into his house. Police said they found marijuana and drug contraband in the home and are investigating. Chesser was not charged in connection to the drugs reportedly found. After running Chesser’s information through dispatch, officers learned that he had a warrant for traffic fines of $1,103. He was then taken to the Trumbull County Jail.