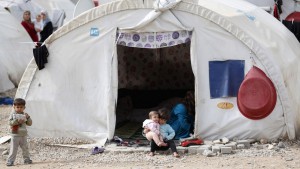 German Chancellor Angela Merkel and top EU officials have arrived at the Turkish-Syrian border in an attempt to soothe tensions over a refugee swap deal between the EU and Turkey. Last month, Turkey and the EU reached a deal aimed at stopping the flow of refugees and migrants into Europe.

The deal initially slowed the number of arrivals to Greece sharply, but boats have been coming again with about 150 people a day, the International Organization for Migration said on Friday. Under the deal, Ankara agreed to take back all refugees and migrants who enter the EU illegally, in return for the EU taking the same amount of Syrian refugees directly from Turkey.

As a part of the deal, Turkey wanted to negotiate EU accession, receive $6.8bn of EU funds to house Syrian refugees, and have short-term visas waived for its citizens before the end of June. Turkey is currently hosting the largest number of Syrian refugees of any country – more than 2.7 million. But human rights groups have warned that Turkey is not a safe place to return people.

Last week, the UN High Commissioner for Refugees (UNHCR) said it was investigating reports about Turkish soldiers firing live bullets at the Syrian border – a charge Turkey has denied. Also, Amnesty International said Turkish authorities have been rounding up and expelling groups of around 100 Syrian men, women and children to Syria on a near-daily basis since mid-January.