About five hundred migrants from Libya to Italy drowned when their boat capsized in the Mediterranean, according to 41 survivors who talked with BBC – although there is no official confirmation by the coastguards in the region. The survivors were transferred to another vessel when it sank in the middle of the night.

The survivors, from Ethiopia, Somalia, Sudan and Egypt, spoke to the BBC from the southern Greek city of Kalamata, where they are being held after their rescue.
According to the group, about 240 migrants left the Libyan port city of Tobruk heading for Italy.
Muaz from Ethiopia insisted that about 500 other migrants died when their boast capsized. He said:

“My wife and my baby drowned in front of me,”. “I was one of the few who managed to swim back to the smaller boat,”

“Two-hundred-and-forty of us set off from Libya but then the traffickers made us get on to a bigger wooden boat around 30m in length that already had at least 300 people in it,”

The survivors were then picked up by a cargo ship, whose crew told the BBC that the migrants initially refused to be handed over to the Greek coastguard as they were determined to get to Italy.

The president of Somalia offered his condolence over the incident. The Somali embassy in Cairo put the death toll at almost 400. 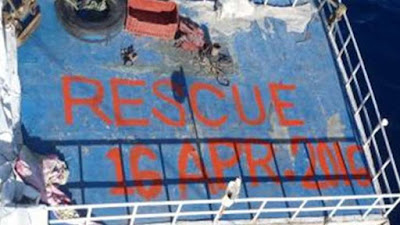 But the UN refugee agency (UNHCR) has cast doubt, tweeting that the information that hundreds of migrants had died appeared “inaccurate”.
The fact that the boat capsized at night in open sea may well have contributed to the lack of clear information available, correspondents say.