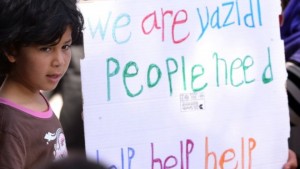 Pope Francis has arrived on the Greek island of Lesbos to show support for refugees who are trying to reach northern Europe. The Pope is heading to a detention camp holding more than 3,000 people, some of whom may face deportation to Turkey. Francis said his Greek trip was to witness “the worst humanitarian disaster since the Second World War”.

Thousands are now stuck on Lesbos after last month’s EU-Turkey deal to try to ease the flow of migrants. The Vatican insists that the Pope’s visit is purely humanitarian and religious in nature and should not be seen as a criticism of the deportations.

However, the Vatican official in charge of migrants, Cardinal Antonio Maria Veglio, has said the EU-Turkey plan treats migrants as merchandise and fails to recognise their dignity as human beings. Pope Francis visited the Italian island of Lampedusa in 2013 to show similar support for migrants after dozens died trying to reach it. On his plane journey to Lesbos, the Pope told reporters: “This is a voyage marked by sadness… We will witness the worst humanitarian disaster since the Second World War.

“We will see so many people who are suffering, who are fleeing and do not know where to go. And we are also going to a cemetery, the sea. So many people never arrived.” The Pope was met at Lesbos Mytilene airport by Greek Prime Minister Alexis Tsipras, Patriarch Bartholomew, the spiritual head of the world’s Orthodox Christians, and Archbishop of Athens Ieronimos II.