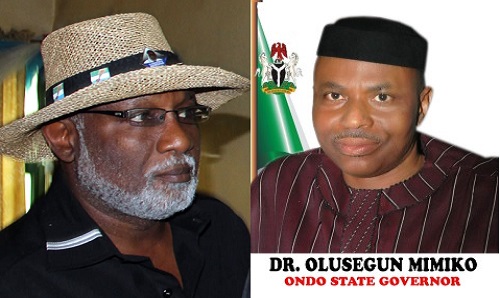 The All Progressives Congress governorship candidate in the 2012 election in Ondo State, Mr. Rotimi Akeredolu (SAN), has accused the state governor, Dr. Olusegun Mimiko, of making life unbearable for the people of the state.

Akeredolu said Mimiko had misapplied his intelligence to the detriment of the people, adding the governor’s seven years in office had been a curse, rather than a blessing.

The APC chieftain accused Mimiko of divisive tendencies, raising the alarm over a plot by the governor to pitch political parties against themselves.

According to the former Nigerian Bar Association president, the governor lacks the political wisdom and native intelligence to harness the abundant resources of the state for the economic well-being of the people.

The senior lawyer, who is eyeing the APC ticket for the November 26, 2016 governorship election in the ‘Sunshine State’ expressed these views in a chat with journalists in Lagos on Thursday.

He said, “Mimiko is intelligent, but he misapplied his intelligence to the detriment of the people of Ondo State.

“We have an army of graduates who are not working. Let the governor point to what he has done to create jobs for 1,000 people in the last seven years. He claimed he was doing something about agriculture, but it is unfortunate that the place he set up to train youths in agricultural practice has been abandoned; the place is a bush now.

“Of course, agriculture is one of the ways to create jobs for the youths, but Mimiko’s misapplication of resources has left the place unproductive”.

The ex-NBA president also gave the governor knocks for allegedly abandoning the State-owned University of Science and Technology in Okitipupa, for selfish reasons.

Akeredolu said, “Why for seven years would a governor leave a university unfunded and now rush there at the twilight of his administration? Because Mimiko wants a university in Ondo town, he now abandoned an existing university. You don’t have to cripple an existing infrastructure because you want to establish another one; that decision does not make sense”.

However, in a swift response, Gov. Mimiko denied the allegations by Mr. Akeredolu, asking him to back up his claims with facts.

The governor, who spoke through his Chief Press Secretary, Mr. Eni Akinsola, accused the APC chieftain of making unsubstantiated claims to boost his profile ahead of the governorship elections in the state.

He also listed some of the achievements of the Mimiko administration, in spite of the lean resources available to the state.

Akinsola said, “I am not surprised that Akeredolu said such things; we are not interested in taking issues with him.

We are only interested in running Ondo State with the meager resources we have.

“In this era of serious economy crisis, the governor just inaugurated today a 27-kilometre road in Ajagba in the Irele Local Government Area. In the next two weeks, the governor will also inaugurate a reconstructed school and a mega school in that area.

“Again, he will inaugurate a township road in Ore. And Akeredolu is from Owo and he cannot deny that there is a dual carriage road constructed by Mimiko’s government in his town”.