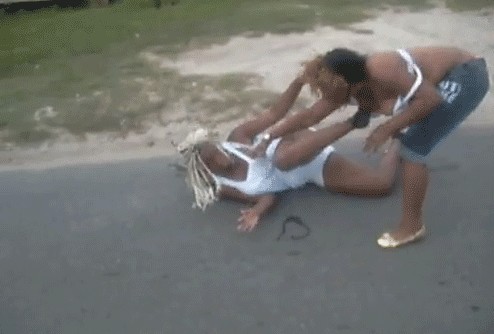 When a family lacks shame, things like this must happen. A terribly enraged woman has carried out a most brutal attack on her own daughter for the most unbelievable reason ever – male lover.

The woman identified as Chiekube Igbinosa in Akumazi community of Delta State, was said to have bit off her daughter’s ear and stabbed her for having s*x with her boyfriend.Sources said the fight which led the mother biting off a scoopful of flesh from the daughter’s ear, took place around camp 74 behind Ibori Golf course in Asaba campus of the Delta State University.

The 46-year-old woman is the secret lover of an Ibo trader who was deported to Nigeria three years ago from Spain, but he allegedly hoodwinked the woman’s daughter into a relationship.

The daughter in question had recently graduated and is on visit to the mother after her Youth Service.

While their love relationship blossoms, the unsuspecting mother who is a school vice principal, was said to have showered her lover boy with gifts.

But this was not to be when the daughter identified as Mabel Igbinosa flippantly opened up to her friend her relationship with the Igbo man who is a building materials trader, including how they made love.

Someone the gist got to the mother and she decided to visit the Igbo man’s housearound Okwe Quarters in Asaba.

After enjoying herself with her mother’s boyfriend, the girl left his house, unknown to her that the mum was around. She immediately pounced on her, bit off her ear before stabbing her with a bottle.Police was later called in and the shameless mother and daughter were taken away.