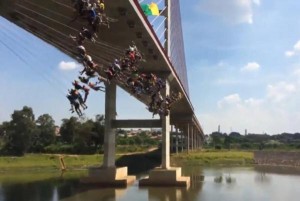 A group of 149 daredevils tied to ropes jumped from a 98-foot bridge in Brazil to establish a world record for “rope jumping.”

The bridge-jumping event Saturday in Hortolandia involved 149 people tied to ropes — and many holding hands — jumping from the bridge and swinging from their nylon ropes underneath the structure.

Organizers said it took four months to prepare for the event, as rope jumping requires the assembly of complicated pulleys and bolts. The feat, which has been submitted to Guinness World Records for official recognition, bested an unofficial record set in Tver, Russia, in July 2012.