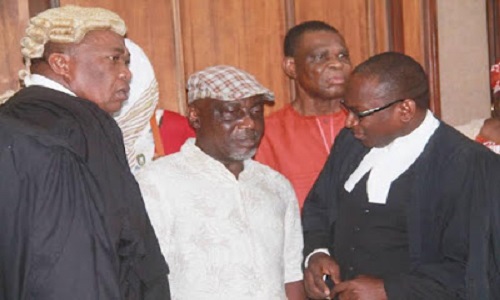 The presiding judge in the corruption case brought against immediate past Minister for Interior, Abba Moro, has withdrawn from the case.
Mr. Moro was arraigned with Anastasia Daniel Nwobia, a former permanent secretary in the Ministry; Femi Alayebami, a deputy director in the Ministry and Drexel Global Technical Nigeria Ltd ON 11-count charge of fraud leveled against them by the Economic and Financial Crimes Commission, EFCC.
They were accused of defrauding 676,675 job applicants of N676,675,000 during the botched recruitment exercise into the Nigeria Immigrations Service in 2014.
The recruitment exercise claimed the lives of at least 12 job seekers while scores sustained varying degree of injuries.
Justice Anwuli Chikere of the Federal High Court, Abuja, who was expected to preside over the amended charges by the EFCC, however, withdrew from the case Wednesday, citing personal reasons.
She said she will send the file back to the Chief Judge of the Federal High Court, Justice Ibrahim Auta, for reassignment.
“I am sending the file back to the Chief Judge for re-assignment for personal reasons”, said Mrs. Chikere, who noted that the parties could continue, when the case is reassigned to another judge.
The prosecution counsel, Aliyu Yusuf, had told the court of his client’s decision to amend the charges against Mr. Moro and his co-accused before the judge announced her decision to step down from the matter.
The amendment of the charge was suspended till a later date.