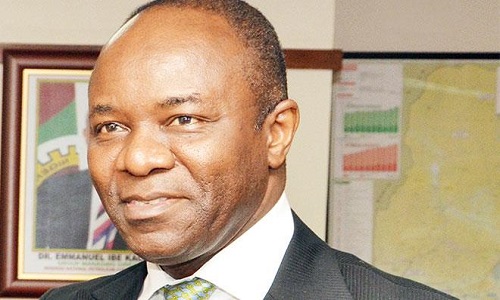 The Nigerian National Petroleum Corporation, NNPC, has described as “completely false”, a widely circulated report that its Group Managing Director, Ibe Kachikwu, has been sacked by President Muhammadu Buhari.
The NNPC said Kachikwu, who doubles as the Minister of State for Petroleum, is still in office discharging the duties assigned to him by the president.
There were unconfirmed reports on the internet on Thursday that the NNPC chief has been relieved of his duties.
The report, which did not cite any official sources, also said Mr. Buhari had named Maikanti Baru, NNPC Group Executive Director, as Kachikwu’s replacement.
This report was however, dismissed as “completely false” by the Group General Manager, Public Affairs Division of the NNPC, Garba-deen Mohammed.
“The story is completely false. It should be ignored by all Nigerians”, Mr. Mohammed said in a telephone interview with PREMIUM TIMES on Thursday evening.
According to the NNPC spokesman, “The minister is currently in his office and has continued to function in the roles assigned to him by the president”.