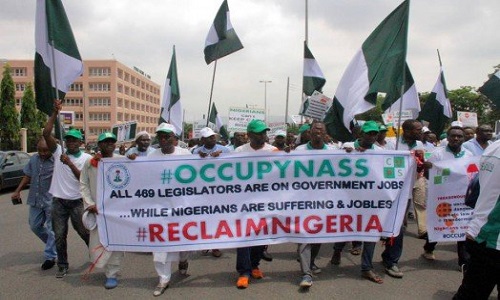 No amount of forceful protest would intimidate any legislator to resign, the Senate leader, Mohammed Ali Ndume, has declared.
Mr. Ndume was reacting to a protest by the “Occupy National Assembly” group, which called for the resignation of the embattled Senate President, Dr. Bukola Saraki, Tuesday.
The Senate leader said there is a democratic process of recalling any senator not performing up to expectations, adding that protest was not the constitutionally recognised process.
He described the protest as a “wrong precedence and anti-democratic”.
“That is why we are not trying to say anything about them because what is happening out there is a very dangerous precedence that we are trying to set.
“I contested to represent Borno South.
“I did not force myself on my people and therefore somebody out there, especially the one that did not elect me cannot force me out because I didn’t come in by force.
“I came in by ballot not by gun, not by placard, I have posters not placards.
“So, if for example, I am short of performance and my constituents feel that they do not have time to waste, there is a clear-cut process by which they can ask me to be recalled.
“They will collect signatures, ask for me to be recalled, that is the democratic way, not by coming in here to stand and say you want to occupy NASS.
“You occupy NASS to do what, to be leader or to be senator? It does not work that way”, Ndume maintained.
The News Agency of Nigeria (NAN) reports that the protesters stormed the National Assembly to demand the resignation of Mr. Saraki.
The protesters; “Occupy National Assembly” also called on the legislators to conclude all issues on the 2016 budget, return their luxury cars and cut their N115 billion budget.
However, another group was also on ground to counter the call for Mr. Saraki’s resignation, saying the group calling for his resignation was anti-Nigeria.
(NAN)