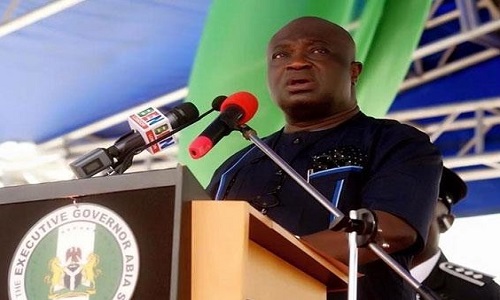 Governor Okezie Ikpeazu of Abia State has ordered that henceforth, foreign rice should no longer be on his menu.

He gave the directive on Tuesday while responding to questions from journalists during his quarterly press briefing at the banquet hall of the Government House in Umuahia, Abia State capital.

Gov. Ikpeazu said he decided to take foreign rice out of his menu to demonstrate that Nigeria, with her rich agricultural potentials, has the capacity for self-sufficiency in food production.

“We cannot be blessed with the kind of arable land we have in the North and the fertile rainforest in the South and still be dependent as a country on foreign food”, he said.

The governor stressed that as a deliberate step towards tackling the prevailing economic downturn occasioned by the global oil slide, Nigeria must develop a new policy that will discourage importation of foreign foods and encourage the cultivation and eating of local foods.

He stressed that this is the time for Nigerians to value the richness of their local menu.

Mr. Ikpeazu, who has mandated all members of the State Executive Council and principal officers to own a farm this year, said Abia must return to the land as a way of recovering its original status as the food haven of Nigeria.