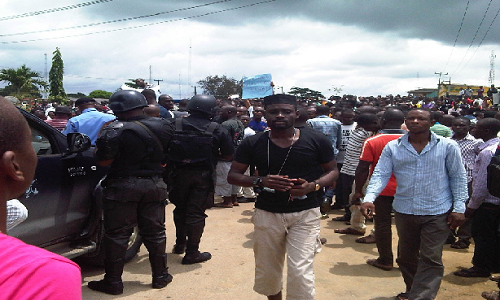 The Rivers State Police Command has denied reports on social media that one of its men shot dead a student of the University of Port Harcourt during a protest by students of the institution recently.
Recall that students of the institution on Monday protested the hike in tuition fees by the management especially the “no tuition fee-no examination”, which they argued was unfair to them, especially those who struggle to see themselves through school.
The policy, introduced in 2015, made payment of tuition fee a prerequisite for students’ sitting for examination. The policy compelled defaulting students to repeat an entire academic session.
According to the reports, a trigger-happy policeman deployed on the scene of the protest to maintain law and order, allegedly shot and killed a final year student and President of the Faculty of Management Science of the University, Ofurum Peter.
The authorities have since announced the closure of the institution for one month.
But the command’s Public Relations Officer, Ahmad Muhammad, during an interview with news men in Port Harcourt Tuesday, denied knowledge of the shooting.

“No student or policeman lost their lives during the UNIPORT protest”, Mr. Muhammad, a Deputy Superintendent of Police, said.

“The policeman reported dead had nothing to do with UNIPORT, because the deceased policeman was shot dead by armed robbers in an isolated case.

“Similarly, no university student was killed to the best of my knowledge.

“All roads earlier blocked by the protesting students have been reopened by the police”, he added.