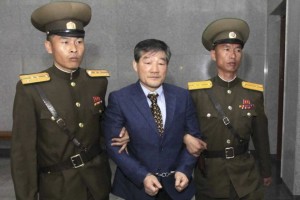 North Korea has sentenced a US man to 10 years of hard labour for spying. Kim Dong-chul, a 62-year-old naturalised US citizen born in South Korea, was arrested last October.  Kim had made an apparent confession in Pyongyang last month in front of reporters, saying he was paid by South Korean intelligence officers.

The US has previously accused North Korea of using its citizens as pawns in a diplomatic game. Pyongyang denies the accusations. At the time of Kim’s arrest, the US State Department had said it would not be commenting on the case as speaking publicly about detained Americans can complicate the process of getting them released.

In March, US student Otto Frederick Warmbier was jailed for 15 years for stealing a propaganda sign and “crimes against the state”.  North Korea has previously said Kim had a USB stick containing military and nuclear secrets on him when he was arrested in the special economic zone of Rason. Kim, who used to live in Virginia, had said he was introduced to South Korean spies by US intelligence officers.

Forced public confessions by foreign prisoners are common in North Korea. Kim’s imprisonment comes amid a period of high tensions. North Korea has recently conducted a series of missile tests following its fourth nuclear test in January, both of which break UN sanctions.