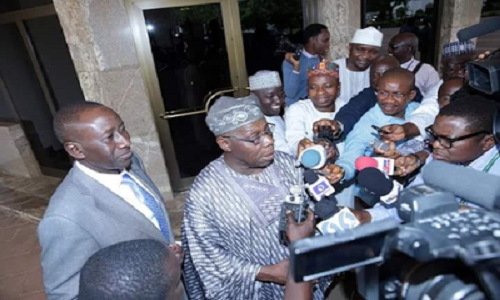 Former president Olusegun Obasanjo has denied ever signing national budgets without getting the details.
Obasanjo was Nigeria’s democratically elected president from 1999 to 2007.
The former president made the denial in a chat with State House Correspondents yesterday shortly after a closed-door meeting with President Muhammadu Buhari at the Aso Rock Presidential Villa in Abuja.
Mr. Obasanjo was responding to media reports quoting the chairman of the House Committee on Appropriation as saying that budgets were signed in the past without the details.
“Eh en? I signed budget without details? Anybody who told you that, go and ask him again”, Obasanjo said.
When asked to air his views on the recently passed 2016 budget, the former president deferred his response, saying he had to read it and know what it contained.
On the seeming delay in passing the budget into the second quarter of the year, he said: “The constitution allows you to continue with the budget provided you did not go beyond the previous year. That can be done up to the middle of the year”.
He also tacitly feigned ignorance of the trial of Senate President Bukola Saraki over alleged false assets’ declaration at the Code of Conduct Tribunal.
The former president simply queried: “Eh en? What is wrong with him (Saraki)?”
On the anti-corruption war of President Buhari’s administration, he simply said: “Eh en?”
Ex-President Obasanjo said he visited President Buhari to share some of his experiences.
When asked to specify the experiences he shared with the president, Obasanjo responded: “Ah! Ah! If I say I shared experiences with my wife, you will ask me wetin I talk with my wife?”