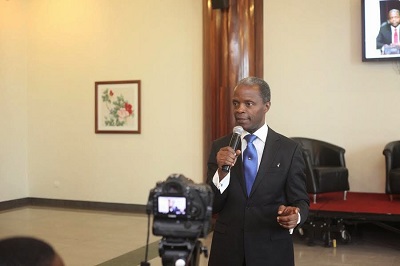 The Office of the Vice President has denied reports in an online medium that Yemi Osinbajo (SAN) has resigned as a Pastor in the Redeemed Christian Church of God, RCCG.
Mr. Osinbajo, a Professor of Law and Senior Advocate of Nigeria, was a Pastor of the RCCG before he was picked as retired Maj.-Gen. Muhammadu Buhari’s running mate for the 2015 presidential election, which they went on to win.
His busy schedules as the nation’s number two man coupled with the responsibilities that come with the office fueled speculation that he had resigned his pastoral calling.
But the Senior Special Assistant to Mr. Osinbajo on Media and Publicity, Laolu Akande, himself a pastor, in a statement on Wednesday, described the report as “misleading and completely baseless”.
According to Mr. Akande, “Prof. Osinbajo continues to serve as a Pastor in the RCCG, honoring the call of God on his life. He is in fact the Pastor-in-Charge of RCCG Lagos Province 48, a position he has held in the past three years and in which he continues to serve. This completely fabricated report should be ignored and disregarded in its entirety”.