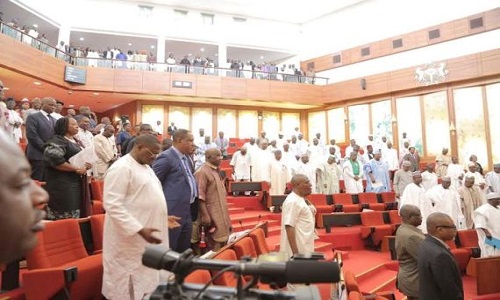 Senators on Wednesday told the Senate President, Dr. Bukola Saraki that the seamless discharge of their legislative duties was being hampered by paucity of funds.
The senators spoke during plenary while responding to questions by the Senate president on why they were having challenges in submitting reports on bills that are before them.
Mr. Saraki had expressed dismay that the reports on bills that had scaled through second reading are still pending at Committees, saying the situation is unacceptable.
“24 reports of committees on bills are yet to be submitted many weeks after passed second reading. This is unacceptable”, he said.
Responding to Saraki’s query, the Chairman, Senate Committee on Land Transport, Senator Gbenga Ashafa (APC, Lagos East) said his committee could not hold a public hearing following the delay in the release of funds.
“It is paucity of funds because up till now we cannot hold our public hearing and without it we cannot write our report”, he said.
In the same vein, Chairman of the Senate Committee on Police Affairs, Senator Abu Ibrahim (APC, Katsina South) said there was no fund for his committee to carry out their functions.
In his response, Senate President Saraki assured that money would be provided to enable the committees perform their functions effectively.
“We will address the issue of funds immediately but for some of the committees that theirs has nothing to do with funds let them make their reports available on time”, he said.