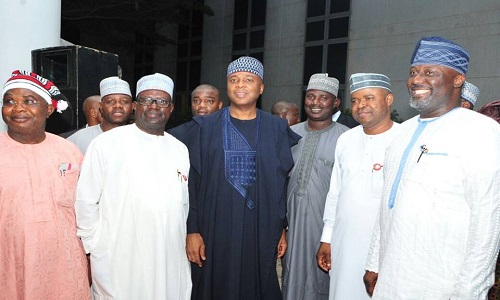 Senators loyal to Senate President Bukola Saraki have vowed to resist every attempt to impeach him from office.

Mr. Saraki is facing trial at the Code of Conduct Tribunal for charges bordering on alleged false asset declaration and corruption.

The senators, who were represented by Rafiu Ibrahim (APC/Kwara South) and Samuel Anyanwu (PDP/Imo East), told journalists on the sidelines of the tribunal sitting in Abuja on Wednesday that they consider the Senate president’s trial as an attempt by the governing All Progressives Congress to paint him black before Nigerians.

“We have since discovered that the trial of the senate president is a mere attempt to blackmail him and make him look bad in the court of public opinion”, Senator Ibrahim said. “No more, no less. A dispassionate analysis of the proceeding of the CCT yesterday has pointed to the fact that the APC-led executive is still embittered against Dr Saraki over the manner of his election as senate president”.

The senators, who were 12 in number at the CCT on Wednesday, down from 80 at the previous sitting, said regardless of its outcome, the trial of Mr. Saraki would be subject to other statutory procedure for the impeachment of Nigeria’s Senate President.
‎
“For those calling for the impeachment of the senate president, we urge them to avail themselves of the provisions of the law relating to such a sensitive step. They will have to produce as many as 100 senators to achieve that aim. As long as they don’t have the majority, the call is a tall dream that will remain a figment of the imagination of the groups and their sponsors”, the senators said.