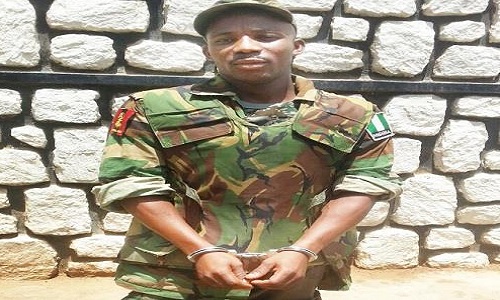 The Kaduna State Police Command has nabbed one Abdul Mohammed, who has been parading himself as a private of the Nigeria Army along Zango Road in Tudun Nupawa area of the state.
The impostor, who was dressed in full military camouflage, was said to have been extorting money from unsuspecting residents under the pretext of being a soldier.
Confirming the development on Wednesday, the Kaduna Police Command spokesman, Zubairu Abubakar, said the suspect was arrested by a surveillance patrol team.
“The suspect was spotted on 11th April, 2016 about 10.30pm in full military camouflage with a bullet proof jacket. He was trying to conceal himself on sighting policemen”, Abubakar, a Deputy Superintendent of Police, DSP, said.
He added that “Preliminary investigation revealed that the suspect is from Tudun Nupawa, Kaduna. He wears the military uniform to aid him to commit crime”.