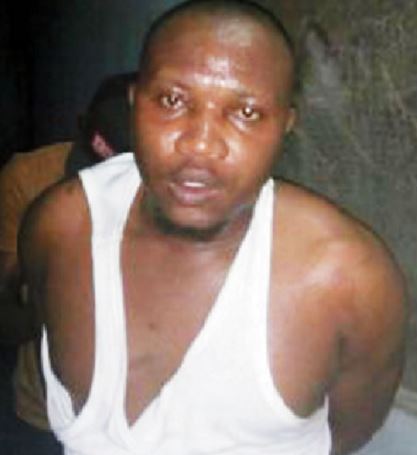 An elusive leader of a notorious gang allegedly responsible for a wave of violence in the last few years in Mushin area of Lagos, Wasiu Akinwande, AKA Olori Eso, has been apprehended by the police in a raid that has been praised by residents of the area.

Akinwande was arrested on Tuesday, after months on the run Saturday PUNCH learnt.

But some residents have expressed fear that he might be released without prosecution by the police like they did in the past.

He was said to have been arrested in January after a renewed gang war in the area.

Akinwande was arrested by policemen from the Area D Police Command, along with two other members of the gang identified as Afeez Kehinde and Mubo Jones at Daleko, Isolo and Olosha areas of Mushin.

He was said to have been released the same day even though residents of the area believe there are overwhelming evidence against him.

Saturday PUNCH learnt that the suspect had once gone underground after a fake burial ceremony was held in his honour by members of his gang.

Saturday PUNCH learnt that earlier in 2011, during a violent clash between Akinwande’s gang and residents of the community, he was also arrested but released soon after.

It was learnt that in order to allow him to go underground, members of his gang printed his obituary and even held a ceremony in his honour to ‘announce’ to the Mushin community that he was dead.

Few years later, residents said he suddenly resurfaced to continue his alleged attacks in the area.

In October 2015, Akinwande allegedly led a group of his gang members on a show of force to Ikeolu Street, Mushin. But by the time their incursion into the area was over, a pregnant woman named Ruka, who was selling noodles in front of her house, had been gunned down.

Ruka’s husband, Waheed was one of the individuals, who reacted to the arrest of Akinwande with jubilation.

Waheed told our correspondent, “I still remember that day like a dream. While everybody fled, my wife had no time to flee when Olori Eso and his gang came and started shooting in the area that day.

“But I am happy that the principal suspect in the murder of my wife is now in custody. I am glad. Many residents of Mushin are also happy. But should we continue to celebrate without the fear that he might be released? No.

“We are celebrating but at the same time afraid that he might be released the way he was arrested in January and released barely five hours after.

“You will realise that despite all the evidence against him, despite what people here know that he did, people around here would still be afraid of voicing out because they know there is the possibility of him being released to continue unleashing mayhem in area. This is why people are afraid to be happy that he has been arrested.”

Saturday PUNCH learnt that an earlier murder case against members of his gang, had culminated in the arrest and arraignment of a colleague of his, Alayode Abiola, AKA Aloma.

The case involved the murder of a nine-year-old girl, Aminat Lateef, who was killed by the gang’s stray bullet in Fadeyi, Lagos, while returning from an errand on December 9, 2010.

At Ikeolu Street, residents reeled out allegations against Akinwande and his gang as they lauded his arrest.

A resident, who pleaded anonymity for fear of reprisals, alleged, “A member of their gang, who had just come back from prison in January 2014, decided to renounce his membership but Olori Eso’s boys decided to kill him. The young man escaped with a gunshot injury to the hand.

“He was later hunted down and killed not long after that. Few years before that, a popular young footballer here called Isiaka, was also killed by the members of the gang the same day they held a peace talk with government officials. That is how ruthless the Olori Eso’s gang members are.”

The police have said they are hunting for other members of Akinwande’s group.

Police Public Relations Officer in the state, Dolapo Badmus, told Saturday PUNCH that the police had been on his trail for a while before he was finally nabbed on Tuesday.

“There is no iota of truth in the allegation that he was always released after arrest. Effort is ongoing to arrest other members of his gang who are now on the run,” she said.