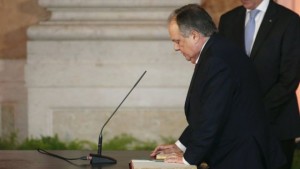 Portugal’s minister of culture has resigned after threatening to slap media critics. In a Facebook post, Joao Soares said that he looked forward to landing “salutary blows” on two newspaper columnists. The post attracted hundreds of critical comments from the public, opposition politicians and journalists. Mr Soares, 66, resigned after Prime Minister Antonio Costa reprimanded him and issued a public apology.

“I won’t relinquish my right to express an opinion,” Mr Soares said in a statement. He also said he did not want to create problems for the centre-left Socialist government, which took power in November. Mr Soares, a former mayor of Lisbon and the son of a former Portuguese prime minister and president, has long been a polarising figure, the BBC’s Alison Roberts in Lisbon says.

One of the articles in the Publico newspaper he was responding to in Thursday’scontroversial post (in Portuguese) accused him of incompetence, rudeness and cronyism. He initially defended his comments as a response to an “insulting personal attack”, but later apologised.