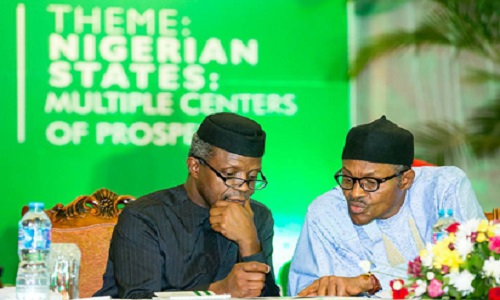 President Muhammadu Buhari has appealed to Nigerians to bear with him over the difficulties in the country, saying Nigerians were seeing the darkest days before the dawn.

In a strategic move to assuage the pains of Nigerians, the President ordered the release of 10,000 tons of grains from the national strategic grains reserves.

According to the Presidency, a total of N9 trillion was lost by the Federal Government to the Boko Haram insurgency. The loss, it said, worsened the economy.

The presidency also noted that the crippling fuel situation was due in part to a N600 billion debt owed fuel importers by the previous administration. It said it was working on ensuring that newly-licensed refineries commenced operations in 2018.

“The Boko Haram insurgency, corruption and the lack of planning by the past administrations and one that should not be blamed on the Change Agenda of the Muhammadu Buhari administration,” a statement by presidential spokesman Garba Shehu said.

“The Presidency firmly rejects the insinuations that poverty and lack are products of the Change mantra. This should be dismissed as an erroneous and misplaced opposition criticism. The President understands the pain and the cries of the citizens of this country and he is spending sleepless nights over how he can make life better for everyone. Contrary to assertions by a faction of the opposition Conference of Nigerian Political Parties, CNPP, the President’s energy and focus are on changing the lives of Nigerians, with a view to making it better than he met it.

“Change is a process. Change does not happen overnight. Change can be inconvenient. Change sometimes comes with pain. Over the past year, the government has been working night and day to deliver on its promise of change to Nigerians, and the painful process is still ongoing.

“This is work in progress. As life gradually returns to normal in much of the country and the northeast in particular, agriculture will resume and traders from neighbouring African countries will once again feel safe to do business with us.

“It is estimated, for instance, that three Northeast states of Nigeria alone have so far lost about three trillion Naira (Nine billion US Dollars) to the Boko Haram insurgency. The previous administration at the center said Federal Government losses amounted to about USD18 billion.

“It would have been a miracle for our country’s economy not to feel the effects of this. And, in addition to the thousands of lives lost to the insurgency, thousands have also lost their means of livelihood. The northeast region of Nigeria is a mostly agrarian society, which means Nigeria has lost billions of naira in agricultural produce. Many communities, which have had their yearly planting and harvesting cycle disrupted by Boko Haram attacks or occupation are still yet to return to their farms. In many of these communities, there have not been planting and consequent harvest for between two to five years.

“At the time this government came to power, about 600 billion naira was owed to fuel marketers in subsidy payments. Strategic fuel reserves were depleted and local refineries not functioning.

“One of the President’s first steps was to pay off the marketers, leaving an outstanding of about N150 billion which is captured in the 2016 budget. The Port Harcourt and Kaduna refineries are being brought back to life. Shortly, Nigeria will resume refining its own fuel rather than depending on imports.

“As part of the permanent solution of recurring cycle of petroleum products shortages, government is working on a plan to ensure that some of the newly-licensed independent refineries start coming on stream from 2018.”

“Government is also turning its attention to the sabotage of the oil and gas infrastructure that has taken so much away from the generation and distribution of electricity.”

“These are just some aspects of the change that Nigerians voted for, a change that is happening and which will soon be felt by Nigerians in every nook and cranny of our country.

“Nigerians are a people renowned for our inner strength and our ability to triumph. These are just the darkest days before the dawn. The change Nigerians voted has indeed begun,” Shehu said.